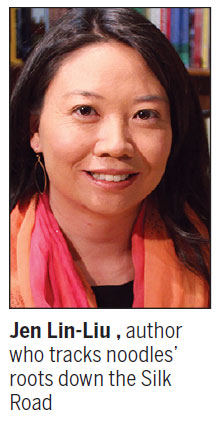 Anybody can be a casual noodle lover, but only a serious devotee would embark on a 7,000-mile trip through the Silk Road to track the history of the noodle. And that's exactly what Jen Lin-Liu did, documented in her latest book, On the Noodle Road.

Part memoir, part history book, part food guide, the book chronicles Lin-Liu's nine-month trip from Beijing to Rome, where she ate numerous noodle dishes and befriended cooks from all walks of life, learning about food - and about herself - along the way.

After getting married, Lin-Liu was gifted cooking lessons in Italy where she learned how to make pasta, and it was in a neighborhood called Trastevere where she realized just how similar pasta was to Chinese noodles, stirring an interest to learn more about the stringy dough.

The noodle took many shapes and forms in Chinese and Italian cuisine, and it is in this ubiquity that it assumed a multidimensional identity: one that wasn't completely eastern or western, fluid in its presentation and importance, depending on the culture that used it. This was crucial to Lin-Liu; it mirrored her own thoughts of belonging, caught between the East and the West as a Chinese American shuffling constantly shuffling between the two countries.

"So as much as this was a sensory journey from East to West, I wanted also to explore what it meant to be 'Eastern' or 'Western' in a more conceptual way-I wanted to discover where the ideas converged and conflicted," she writes. "Traveling through the cultures that straddled the East and West, I figured, might reconcile what I'd felt were opposing forces in my life."

Through the trip, the noodles presented themselves in vastly different forms: the hand-pulled noodles from China, the gyulchetai (noodle squares) from Kyrgyzstan and the maltagliata (badly cut pasta) from Italy. Noodles naturally filled her diet wherever she went, but surprisingly, Lin-Liu reveals that her favorite noodle isn't the long, stringy variety associated with the term-it's dumplings, which she considers to be a part of the noodle family.

"The word for 'noodles' in Chinese is mian, which means some kind of paste made out of wheat that is generally boiled," Lin-Liu said in an interview. "It doesn't have to take the form of a long string, there are all kinds of examples in both Chinese and Italian culture."

Though the purpose of her trip was to explore the noodle's origins, Lin-Liu uses On the Noodle Road to reflect just as much on gender, identity and people's perceptions of cooking. One truth she discovers about cooking that was prevalent across different lands, different cultures: cooking can be just a necessity sometimes, not a romantic hobby. This was the reality through which Lin-Liu came to learn about the cooks she met along her journey. The women whose cooking is so vital to the families they supported often cooked out of circumstance and gender expectations, and at times don't even have a seat at the table with the men or guests.

The trip also led Lin-Liu to think about how cooking strongly shapes roles that women have to play in society. "My identity as a woman became more important," she said. "It made me think about gender in a different way because women's issues talked about in the US are so focused on American issues-which are valid issues as well-but it's a very different kind of inequality" from what she said she had witnessed in her travels.

Though she said she had limited time to explore each area along the Silk Road, Lin-Liu reflected that "one of the great pleasures of writing this book was that I was able to explore Tibetan areas, Uygur areas, the Chinese Muslim areas," she said, "and write about minorities who don't necessarily have much of a voice."

The most surprising thing she said she learned about China, where she now lives in Chengdu, is how "the idea of China really changes as you move west." There were Chinese in the west who looked Turkish or Mediterranean. "It's not just one China," she said.

Joint talks on trade in services