China and other developing countries are experiencing a surge in breast cancer incidence and mortality, according to a new study released by GE Healthcare. Among the factors contributing to increased rates are longer life expectancy, the use of post-menopausal hormonal therapy and lifestyle choices, including having fewer children, according to the study.

"In these regions mortality rates are compounded by the later stage at which the disease is diagnosed, as well as limited access to treatment, presenting a 'ticking time bomb' which health systems and policymakers in these countries need to work hard to defuse," said Bengt Jonsson, professor of health economics at the Stockholm School of Economics and co-author of the report.

According to the study, 15 million years of "healthy life" were lost to breast cancer incidence or mortality in 2008. Breast cancer is currently the number one cause of cancer deaths for women worldwide. Women in Africa, China and the US led the countries in which women have been most affected in recent years. A lack of consumer understanding and access combined with the economic burden of treating the disease have contributed to low rates of seeking help or undergoing mammograms, GE reported.

The US still outpaces China in breast cancer diagnoses: One in eight women in the US will be diagnosed in their lifetimes; in China, one out of 40 will be diagnosed. However, the data only reflect those who enter into healthcare. According to the GE report, 27 percent of women over the age of 40 living in urban areas undergo mammograms once every two years. In the US, 50 percent of women in the same age bracket receive a mammogram annually. 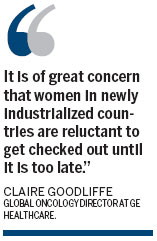 "It is of great concern that women in newly industrialized countries are reluctant to get checked out until it is too late," said Claire Goodliffe, global oncology director at GE Healthcare. "This is why GE is working with a number of governments and health ministries in these regions to expand access to screening and improve consumer awareness. Some of these initiatives are making excellent progress."

While China currently has the lowest age-adjusted incidence of the countries in question, the one-child policy and other lifestyle changes due to rapid economic growth will potentially have enormous long-term effects on breast cancer rates, GE said. Rates among middle-aged women in Chinese urban areas have already increased 20-to-30 percent over the last decade, according to the study.

Ben Anderson, MD, who authored a 2011 report on breast cancer rates worldwide in The Lancet Oncology, predicted that incidence and mortality from the disease would increase by 50 percent before 2020, with the highest rates in developing countries. Efforts to combat the disease require tailored treatment in developing countries, rather than a "one-size-fits-all approach," he told The Huffington Post.

In 2011, GE committed $1 billion to a five-year campaign against breast cancer, expanding cancer diagnostic capabilities, developing biopharmaceuticals and various educational programs in the areas of healthy living and early detection.