By Li Xiaokun and Zhou Wa in Beijing, Chen Weihua in Washington and Cai Hong in Tokyo (China Daily USA)

Chinese Foreign Ministry spokesman Qin Gang said China's zone is not aimed at international airliners. "We hope that relevant countries' airlines cooperate, so there is more order and safety for flights."

Civilian flights have been operating safely and normally since China announced the zone, which covers its Diaoyu Islands, on Saturday, Qin said.

China requires aircraft to provide a flight plan and their identification and to maintain two-way radio contact to respond to identification queries from Chinese authorities.

Qin said airlines from many countries and regions have reported their flight plans to the Chinese authorities.

Shen Jinke, spokesman for the PLA air force, said Chinese fighter jets carried out a regular patrol in the zone on Thursday.

Such patrols are for defense purposes and in line with international practice, Shen said.

Defense Ministry spokesman Yang Yujun said at a news conference on Thursday that Tokyo, which asked Beijing to cancel its zone, set up its own air defense zone in 1969 and more than 20 countries, including the United States and Japan, have established such zones.

"If they want China to cancel the zone, then we would ask that Japan first revoke its own zone. Japan consistently blames others and smears the name of other countries but never examines its own conduct," Yang said.

Japan and South Korea said on Thursday that their military planes have flown through China's air defense zone.

Two US B-52 bombers flew through the zone on Tuesday. China's Defense Ministry said the military monitored the entire process and ascertained they were US aircraft. 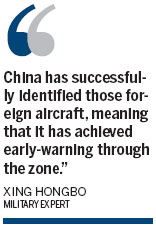 "China has successfully identified those foreign aircraft, meaning that it has achieved early-warning through the zone," he said.

At the same time, Japan is expected to establish its national security council next week, as it is considering expanding its air defense identification zone in the Pacific Ocean, Japan's top-selling newspaper Yomiuri Shimbun reported on Wednesday. Its Defense Ministry is also mulling stationing fighter jets at bases in the area, the report added.

The council will be made up of the prime minister, the chief cabinet secretary and the foreign and defense ministers.

The council will convene a meeting of the prime minister and three key Cabinet members approximately every two weeks to discuss national security issues and lay down basic principles on how to deal with key problems.

Establishing the council would allow Abe to test the political waters on his greater goals of constitutional change - especially the contentious Article 9 which renounces Japan's right to retain military forces - and his political will to deal with Japan's neighboring countries, experts said.

Wang Xinsheng, a professor of Japanese studies at Peking University, said the council was one of Abe's main goals after he started his first term as prime minister in 2006.

"It reflects Japan's concern over China - the council is designed to contain China, which is regarded as a main regional competitor," Wang said, adding that territorial disputes, especially the Diaoyu Islands issue, will be the "core topic" for the council.

Liu Junhong, a researcher on Japan studies at the China Institute of Contemporary International Relations, said forming the council is a major step in Japan's drive to expand its military power.

"The council's mechanism gives too much power to Abe in setting national security policies, which worries many Japanese and the international community," said Liu, who was formerly a visiting researcher at Waseda University in Japan.

Zhang Fan in Beijing contributed to this story.

China's new billionaires may have a lot to learn