The Shenzhen-based medical devices maker - considered a bellwether for the medical technology industry in China - said the acquisition took the form of an "equity transfer" but disclosed no other financial details. The companies had announced early last month that an agreement on a stake purchase was reached.

The Shanghai Long Island deal comes as medical-equipment purchasing by hospitals in China slows amid a general cooling of the nation's economy. Shanghai Long Island's research and development center is based in New York while its products are made in Shanghai.

"We believe that the collaboration between Mindray and Long Island will bring many synergies to both parties," the companies said in the January statement posted on Shanghai Long Island's website. "We expect the combined company to provide better products and services to our customers, broaden development opportunities for our employees, and help Long Island establish a stronger position to compete in the marketplace."

Mindray, which seeks to maintain revenue growth through new product releases, has said it plans to launch seven to 10 new products this year.

Medical professionals use Shanghai Long Island's testing kits - part of the group known as in-vitro diagnostics - to analyze circulation problems. Mindray, which has an in-vitro diagnostics division that makes products for both human and veterinary use, said the transaction would open "a new growth area".

Last fall, Mindray acquired Zonare, a California-based maker of high-end ultrasound machines, for $105 million in a purchase seen as helping it to become a leader in the market for premium imaging products. In 2008, Mindray acquired Datascope Corp's patient monitoring business to become the third-largest player in the global patient monitoring industry, aiding its expansion in the US and Western Europe.

"By combining Long Island's strength in the field of thrombotic and hemostatic reagent products and Mindray's advantages as a world-class medical equipment maker, we are confident that Long Island will be able to raise the quality of both our products and services that will better meet customer requirements," the release said.

No plans are afoot to change Long Island's "employee base" and the terms of pre-deal contracts will be honored, according to the release.

Three weeks ago, Mindray said it raised its full-year 2013 revenue forecast to $1.21 billion. That view is 14.3 percent above the consensus of analysts surveyed by Zacks for 2013 revenue of $1.2 billion. The outlook also is above the company's previous view of at least 13 percent but still lower than its original forecast of at least 18 percent. The company - which has separated itself from its rivals in China by having obtained US Food and Drug Administration clearance for most of its products - had lowered its original forecast amid what it said was sluggish purchasing by hospitals in China, where economic growth has cooled. For 2014, MR expects revenue to grow at least 15 percent compared with 2013. 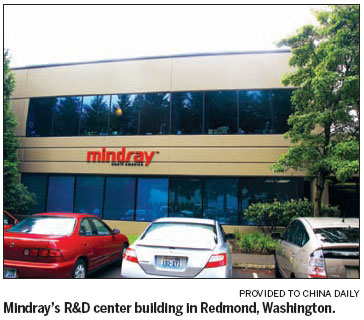