For Betty Tang, a Chinese American who is making a bid for a seat on the Walnut City Council, courage and wisdom are arming her for a political battle against candidates with ties to both Sacramento and Washington DC.

"Chinese Americans need their own spokesperson, one who knows how to play the political game by the rules and speaks up for their equal rights in mainstream US society," she told China Daily during a fundraiser for her campaign on Saturday night.

If successful, she would be the first person from the Chinese mainland to serve on a city council in the Los Angeles area.

She came to the US from her hometown of Dalian, a city in China's eastern province Liaoning, in 1992 at the age of 27-years-old on an L1 visa. Two years later, she moved to Walnut City and established her family there. Her husband was from Taiwan, and both of their two daughters were born in the US.

Twenty years ago, most of Tang's neighbors were from Taiwan or Hong Kong. In 1995, the numbers of immigrants from the Chinese mainland began to increase quickly, with many of them showing a strong interest in participating in local politics and social issues.

By now, more than 60 percent of the city's population is of Chinese heritage.

"Today, we hope US mainstream society has better recognition of our existence. Immigrants from the Chinese mainland are able to have more political influence based on their economic strength," she said.

"I have voted ever since I became a US citizen, but many Chinese immigrants have a poor awareness of the system and don't take advantage of their right to support people who can speak on their behalf," she said.

Besides serving as a three-term president of Walnut high's Chinese-American Parents Association, Tang is also the founder of the World Youth Education foundation and a board member of the coordinating council of the Walnut Valley Unified School District and the Chinese American Association of Walnut.

Her recent performance in the fight over proposed constitutional amendment SCA-5 won applauds among supporters in local communities.

"Every year, Walnut school district sees hundreds of distinguished Chinese-heritage students get offers from the UC system or state university," she said.

"But, the SCA-5 was trying to tell us a cruel fact: our children's efforts are ignored because of their race, she said. "Chinese Americans are minority race in the United States, and we face discrimination rather than privilege. If I win the campaign, I would have a better opportunity to make a stronger voice to safeguard our rights."

She is vying for one of two seats in the April 8 election, running against Council Members Mary Su and Bob Pacheco.

She said the council needs someone with new ideas and called for term limits on those who serve. If she wins a seat, she plans to focus on education, crime control, welfare for elders, healthcare and building closer commercial connections between Walnut and the Chinese mainland.

An organization of Walnut residents - Citizens to Protect Walnut - announced earlier that they filed legal complaints against Tang with California's Fair Political Practices Commission (FPPC), California's Attorney General and with the US Internal Revenue Service (IRS).

Betty told China Daily she returned the money two days after it was received and filed a notice with FPPC.

Several days ago, 1,000 of Tang's campaign posters were stolen. 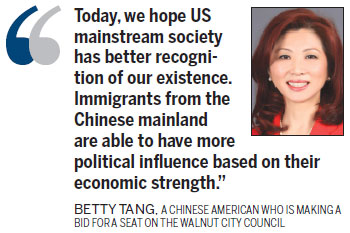