The Kissinger Institute on China and the United States, a leading research unit housed within the Woodrow Wilson International Center for Scholars, on Tuesday unveiled its new logo decorated with Chinese calligraphy, a Chinese character that was written and given by China's top envoy to the US.

Cui Tiankai, Chinese ambassador to the US, presented the framed calligraphic character Ji to Henry Kissinger - whose three-letter last name in Chinese starts with the same character - during a ceremony in Washington.

The character has also become the centerpiece of the institute's new logo, unveiled before experts and policy makers in the field of US-China relations.

"It was a special honor for me," said Cui, adding that although he is not qualified to be called a calligrapher in China, he accepted this request to draw a Chinese character for the new logo with all his "heartfelt respect and admiration for Dr Kissinger".

Cui recalled that Kissinger first visited China in July 1971. "Just imagine, what strategic vision, wisdom and courage it took 43 years ago for Dr Kissinger and leaders of the two countries then to take the very first steps and open a new path for the relationship between our two great countries," said Cui.

The Chinese character Ji means basis, foundation or what is fundamental. "I think Dr Kissinger has already built a very good foundation for our relationship. And on that basis, we have to move on," said Cui, adding that Kissinger's advice and guidance would always be "of fundamental importance to us".

Noting that Cui was a graduate of Johns Hopkins University's School of Advanced International Studies, director of the Kissinger Institute on China and the US Robert Daly said that Cui embodied what the Wilson Center was all about because in him he "brings together the world's fellowship and the world's public policy, which is the goal of Wilson Center".

The Kissinger Institute on China and the US, inaugurated in 2008, is committed to promoting greater understanding on issues in the US-China relationship. 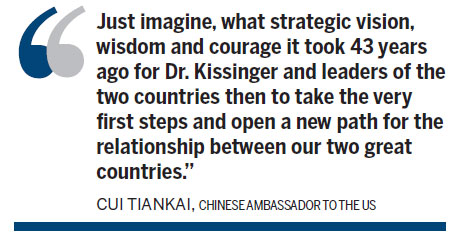