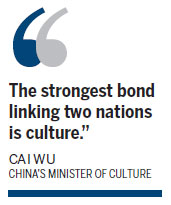 After visiting Washington DC on June 28 for the Smithsonian Folklife Festival on the National Mall, Cai was in California to discuss the vibrant cultural exchanges and business cooperation in the culture industry between the US and China.

He emphasized that the best relations were built on a solid foundation of cultural exchange.

Cai reviewed the fruits of cultural communication between the US and China, including the China-US Cultural Forum organized three times by China's Ministry of Culture and the US National Endowment for the Humanities, as well as other projects sponsored by governments, corporations and nonprofit organizations in the US and China.

In his speech, Cai also explained the popular concept of "the China Dream", as defined by President Xi Jinping and well acknowledged by the people of China. To make such a dream for the Chinese people come true, Cai said, a prosperous development of culture is necessary.

As American companies like DreamWorks and Disney began their deeper engagement in China, the Chinese cultural industry advanced in its cooperation with the US too, he said.

On Tuesday Cai visited the Chinese Garden at the Huntington Library in San Marino with Che Zhaohe, cultural consul of the Consulate General of China in Los Angeles, where he saluted the contributions the library had made to the US-China cultural bridge.

Chinese turns to US for milk products

US hopes high for S&ED