China still No 1 for US adoptions

China remains the most popular country for American parents to adopt a child, with 2,040 adoptions last year, according to US State Department figures released on Wednesday.

China's total of 2,040 was down more than 10 percent from 2013 and far below the peak of 7,903 in 2005. Since then, China has expanded its domestic adoption program and sought to curtail the rate of child abandonment, as well as modified its one-child policy.

China also has been placing emphasis on the foreign adoption of children with mental or physical disabilities, as well as on stricter adoption regulations for foreigners to qualify.

Ethiopia was second at 716 adoptions, down from 993 in 201. Ethiopian authorities have been trying to place more abandoned children with relatives or foster families.

Chuck Johnson, president and CEO of the National Council for Adoption, said China's lower adoption number for 2014 is more "a reflection of the number they're willing to do than anything else".

He said the type of children being adopted in China has changed, with the majority now having a diagnosed special need because China is focused on those children rather than younger children or children considered healthy.

Johnson said China's adoption program has historically been one of the most reliable for Americans.

"The Chinese government has a very strong central authority called the China Center for Children's Welfare and Adoption (CCCWA) and they exercise a very strong oversight on the entire process," Johnson said in an interview.

"It's been a little bit easier to work with the Chinese government than maybe some other countries because of the one central authority with one strong voice with such strong oversight there."

In addition to policies intended to promote domestic adoption and foster care in countries such as Ethiopia, and sentiment against adoption in emerging economies like China and South Korea, the Wall Street Journal reported Wednesday that there has been an increase in US scrutiny of some countries and individual cases.

"The State Department focuses too much on making sure children aren't trafficked without seeing all the excellent things intercountry adoption can provide," Bill Blacquiere, president of Bethany Christian Services, a national agency, told the newspaper.

Trish Maskew, the State Department's adoption chief, told the Journal that the US aims to protect all those involved in the process. "It's very troubling for families to adopt a child they believe is an orphan and then find out they are not an orphan."

As international adoption has slowed, some agencies, including Michigan-based Bethany, have begun expanding domestic programs, according to the Journal.

Johnson said that starting in April the Alexandria, Virginia-based adoption council will launch "I Choose Adoption", a campaign to reach American women with unintended pregnancies to consider adoption.

In May it will start a campaign called "Families For All" to remind parents about foster children available for adoption. 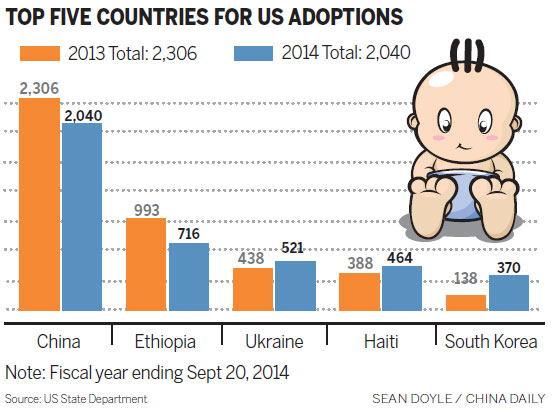 US 'miscalculated' on AIIB: Albright

Chinese woman charged with fraud remains in US jail

Tales of a nomad