Pentagon to greet general from China

Fan Changlong, on tour with delegation, will meet US defense secretary

The Pentagon will provide some pomp on Thursday for the visiting Chinese Central Military Commission Vice-Chairman Fan Changlong, the most senior Chinese military leader coming to Washington since President Xi Jinping assumed top leadership in late 2012.

The US Department of Defense said on Wednesday in an e-mail to journalists that Defense Secretary Ash Carter will welcome General Fan to the Pentagon with an enhanced honor cordon at 10 am on Thursday.

The meeting with Carter on Thursday, however, is closed to the press.

On Friday morning, Fan is scheduled to join US Army General Ray Odierno to sign a US-China Army-to Army Dialogue Mechanism (AADM) at the National Defense University. The two met in Beijing in February 2014 when Odierno visited China.

The Chinese delegation started the US trip on Monday, with visits to a Boeing factory in Seattle, the aircraft carrier USS Ronald Reagan in San Diego, and the Army base at Fort Hood, Texas, before heading to Washington.

The high-level meeting has drawn special attention because it comes just two weeks after Carter publicly criticized China for its construction work on reefs and islets in the South China Sea. China has described the work as totally within its sovereign rights, while US officials accused China of being provocative and changing the status quo.

The two countries also have been confronted with major challenges in cybersecurity. The US Justice Department indicted five People's Liberation Army officers on cyber espionage charges a year ago, triggering protests from the Chinese government and military and resulting in the suspension of the bilateral working group on cybersecurity.

The visit also comes during a busy season of bilateral engagement. The seventh round of the China-US Strategic and Economic Dialogue (S&ED) will be held in Washington later this month, and the 2015 China-US High-Level Consultation on People-to-People Exchange will be held in several US cities this month. Meanwhile, President Xi is scheduled to pay a state visit to the US this fall. 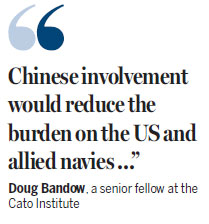 Observers said the meeting between Fan and Carter will focus on the evolving Sino-US military relationship and also will cover contentious issues such as the South China Sea and cybersecurity.

There have been heated debates in the United States lately over whether the US should engage China more or take a more confrontational attitude.

Doug Bandow, a senior fellow at the Cato Institute and a former special assistant to President Ronald Reagan, rebuffed a remark by Senator John McCain of Arizona that the US should not invite China to participate in the Rim of the Pacific (RIMPAC) naval war exercise next year.

Bandow argued that the exercise is mutually beneficial for non-military purposes. "Chinese involvement would reduce the burden on the US and allied navies and highlight reasons for cooperating with rather than fighting against them," he wrote in the China US Focus blog early this month.

Noting that military cooperation has been sparse, Bandow said demystifying the other side makes it harder to demonize.

"Obviously, even warm personal relationships don't prevent governments from careening off to war with one another," he wrote. "However, learning that the other side's military personnel are not devils incarnate might cause leaders to at least temper the advice they offer in a crisis."

China, US take fresh views on TPP and AIIB

G7 accused of ignoring the facts over South China Sea

MSCI delays including China A shares in benchmark index