Will the fate of DOMA affect Shanghai Pride Week? 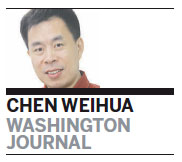 It was a sweltering morning in Washington on Wednesday, but on the sidewalk outside the Supreme Court, huge crowds were cheering as the court struck down a federal provision that denies legally married gay and lesbian couples the benefits enjoyed by other married couples.

The 5-4 ruling on section 3 of the Defense of Marriage Act, known as DOMA, was a big victory for gay rights advocates. DOMA was signed into law in 1996 by President Bill Clinton, who tweeted on Wednesday to praise the ruling.

Two men walking their bikes through the crowds said they were about to get married and the Supreme Court decision just elevated their marriage.

Two young women held a sign declaring "Just Married," while a woman standing next to them carried the sign of "Proud Mom."

People were hugging and kissing, some had tears in their eyes.

The Supreme Court decision on Wednesday also included a ruling for same-sex marriage to resume in California by striking down Proposition 8, which restricts marriage to being only between a man and a woman.

Right now, 12 US states and the District of Columbia have legalized same-sex marriages.

Speaking for the 5-4 majority, Justice Anthony Kennedy said that DOMA was unconstitutional because it violated the right to liberty and equal protection for gay couples.

"By seeking to display this protection and treating those persons as living in marriages less respected than others, the federal statute" violates the Constitution, Kennedy wrote.

The ruling on Wednesday means that more than 100,000 same-sex couples who are legally married in the US can finally enjoy federal benefits such as tax breaks and pension rights that are available to heterosexual couples.

Celebration of the rulings was also reported in many other US cities, especially those in California, where 18,000 gay and lesbian couples got married before Proposition 8 was introduced in 2008.

A Pew Center survey in May found that for the first time, more than half (51 percent) of Americans favored allowing gay men and lesbians to marry. The same survey found that 72 percent of Americans believe that legal recognition of same-sex marriage is inevitable, regardless of whether they themselves favor or oppose it.

With France joining the list last month, a total of 13 countries in the world have legalized same-sex marriage.

In China, progress has been made in the past years albeit at a slow pace.

The 5th annual Shanghai Pride Week was just held from June 14-22 in the Chinese metropolis. The 3,000 attendees over the week were considered a phenomenal turnout for the art and photo exhibitions, film festival, panel discussion and parties.

Unlike gay pride festivals in other cities around the world, the Shanghai Pride Week did not have a parade since it was not permitted by the local government.

Still, organizers hailed the 70 percent local Chinese and 30 percent foreign participation as a record. When the first Shanghai Pride Week was held in 2009, it was mostly an event for the expat community.

On May 17, the International Day against Homophobia and Transphobia, some 100 gay and lesbian rights advocates from several Chinese provinces gathered in Changsha, Hunan province, to protest discrimination against LGBT (lesbian, gay, bisexual, transgender) community. The organizer, nevertheless, was detained by local police for holding a demonstration without a permit, the local Xiaoxiang Morning Post reported.

The number of LGBT community is estimated at 20 to 50 million in China, according to various studies.

A survey by the Canton Public Opinion Research Center last October showed that only 31 percent of the 1,502 people polled in three large cities of Beijing, Shanghai and Guangzhou said gays and lesbians were acceptable, while 54 percent did not regard homosexuality as normal. The rest 15 percent said it's hard to say.

Another survey released last month by the PFLAG China, an organization formed by LGBT and their parents, friends and supporters, showed that most members of the LGBT community members did not disclose their sexual orientation in their workplace since pressure and discrimination there was serious.

The study also found that a mere 6.3 percent fully disclosed their sexual orientation in their workplace, while 47.6 percent did not disclose it at all. Some 45.6 percent chose to tell some colleagues and friends.

More than half of people polled claimed they had been humiliated and offended by their bosses and colleagues, while a third said they had received verbal abuse at work.

More than half said that no colleague came to their help during their maltreatment. Only 22 percent said they received comfort from colleagues.

Homosexuality was decriminalized in China in 1997 and removed from the official list of psychological disorders in 2002. Li Yinhe, a well-known sociologist and sexologist, has been the strongest advocate for gay rights and same-sex marriage in China.

Apple will hike its app prices

Chinese firm looks to take a bite out of Apple

Bad habits add $34b to annual cost of cancer