A tricky conversation for Asian-American feminism 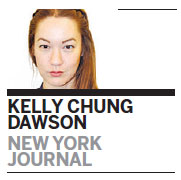 When the feminist hashtag #NotYourAsianSidekick quickly garnered 45,000 tweets over the holiday season in a conversation about the marginalization of Asian women, it also provoked the counter-hashtag #AsianPrivilege, which questioned whether Asian Americans could genuinely speak to the experience of discrimination.

"#NotYourAsianSidekick because I'm tired of the patriarchy in Asian-American spaces and sick of the racism in white feminism," tweeted Suey Park, an advocate for Asian-American feminism and the originator of the hashtag.

Among the critics of Park's Twitter-propelled movement was user NayNayCantStop, who wrote: "#AsianPrivilege means being overrepresented at universities then changing the narrative to make it like you [sic] oppressed," and later: "I'm all about having Asian allies, but not until they check their #AsianPrivilege. They [sic] richer than even whites."

The question of whether Asian Americans, who report a higher household income today than any other ethnicity in America, can claim knowledge of oppression is already a touchy subject. According to the White House's Initiative on Asian Americans and Pacific Islanders, 30-to-31 percent of all AAPIs report having experienced race-based discrimination in their careers, but as a group AAPIs are rarely acknowledged to be oppressed. For Asian American women, who on average earn $0.73 for every $1.00 earned by Asian men, the conversation can feel particularly tone-deaf.

Many of the #AsianPrivilege-tagged tweets were posted by users identifying as black feminists, who earlier this year had as a group popularized the hashtag #SolidarityIsForWhiteWomen, in a previous discussion about the exclusiveness of white feminism. That this new discussion of Asian privilege originates with black feminists is indicative of a binary white-black privileged-oppressed understanding of race, Fang said.

China is now No 1 in trade

Lenovo targets US, but when?