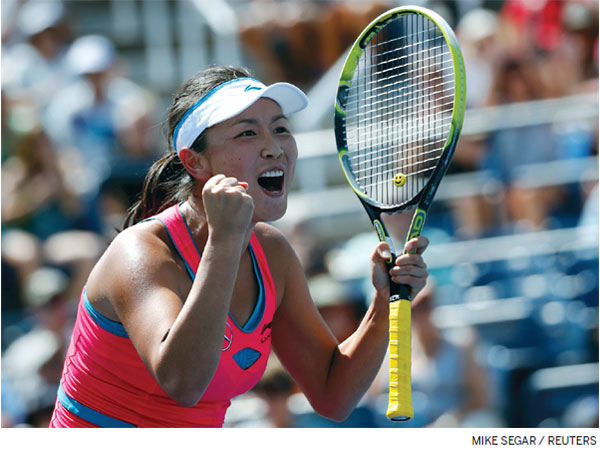 Wednesday was another busy day at the USTA Billie Jean King National Tennis Center in Flushing, New York, and the lesser-known Chinese participants have already made a name for themselves.

Early matches on day three at the 134th US Open Tennis Championship featured an upset at the hands of a young, upstart Chinese player, Peng Shuai (above).

Peng, coming off a victory over fellow Chinese counterpart Zheng Jie on Monday, ousted Poland's No 4-ranked Agnieszka Radwanska in straight sets on Wednesday, 6-3, 6-4. Peng, the Tianjin native, made short work of Radwanska, who is one of tennis' most popular female players, by winning more than 70 percent of her first serve points and giving Radwanska only one chance to break serve. Up next for Peng is Italy's Roberta Vinci.

And in other action on Wednesday, Zheng Saisai, of Chengdu, took Lucie Safarova, of the Czech Republic, to three sets before ultimately losing 6-3, 4-6, 6-2. Wang Qiang, the third and final Chinese player left in this year's women's singles draw, will take on Australia's Casey Dellacqua on Thursday.