US real estate market gets boon

When Chris Cooper and his wife heard that a house next door to their home in San Mateo was for sale, they decided to take a look at it on its pre-opening day.

"I found I was the only non-native Chinese speaker in the house," said the Deloitte executive.

Cooper has been doing business related to China for 21 years, and recently made a keynote speech at an event focused on providing practical advice to Chinese companies who have invested or will be investing in US commercial real estate.

"We watch what's going in the macro-economy of China. When you watch the currency, you see RMB declined in value in the last four to six weeks," he said.

As the RMB declines in value, there is a pressure on the RMB, he said. "That is going to force the US real estate and commercial real estate sector to even get hotter."

Among the California real estate experts' circles, around $50 billion expected to be invested by the Chinese in overseas real estate in the next five years.

"There were $160 million in transactions our company concluded for Chinese investors in 2013," said Skip Whitney, executive vice-president and partner of Kidder Matthews, a China-focused cross-Pacific real estate group in San Francisco. 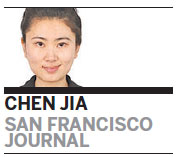 "Chinese investors have a hard time adapting to the US marketplace, while friends and family are not necessarily the best way to approach investment strategy," Whitney said.

"In 2014, Chinese investors have to compete with local rivals for US properties, the dollar is green, no matter where it comes from," he said.

Also, Chinese investors are used to taking their time and forging relationships because of "cultural differences" and the "language barrier", he said.

There was $12 billion worth of projects from Chinese investments in the US real estate over the last 18 months.

In 2014, Vanke teamed up with RFR holdings to build a 61-story residential tower in Manhattan. In 2013, Vanke formed a joint venture with Tishman Speyer to build two luxury high-rise condos of 642 units in San Francisco for $620 million.

Greenland invested $1 billion in a downtown Los Angeles project, after it agreed to become the majority owner-developer of the $4 billion Atlantic Yards residential complex planned in New York City in 2013.

In 2013, Oceanwide spent $180 million to acquire a 4.6-acre site across in Los Angeles to build two hotels, apartments and retail space. Zarsion agreed to invest $1.5 billion to transform 65 acres industrial land in Oakland into a waterfront neighborhood with 3,100 homes. CEO of SOHO Zhang Xin paid $600 million for a 49 percent stake in the Park Avenue Plaza.

In 2012, HNA saved an office building on Sixth Avenue from foreclosure for $265 million. HNA also brought the boutique Cassa Hotel on Times Square.

At the event, American experts reached consensus that the Chinese real estate market is slowing down and Chinese government supports overseas investment and diversification, which will be a boon to US real estate in 2014.

Also, Chinese real estate development firms want to capitalize on their Chinese client base to invest in international real estate, according to their observations.

Also, leasing is a good way to start for traditional companies as the first step, he said.

"Many Chinese companies start with leasing small space. Now they are looking to acquire large headquarters buildings," he added.

No substantive findings for MH370