Six Palo Alto, California, parents spoke to the Board of Education during a public comment session to urge the board to expand a Mandarin immersion program to the middle school level.

Chinese immersion education is a method of teaching the Chinese language in which the Chinese is the language of classroom instruction. Through this method, learners study school subjects, such as math, science, and social studies in Chinese.

Currently, there are several elementary schools in Palo Alto providing Mandarin immersion programs and two high schools offering Mandarin classes. However, there is no middle-school instruction, resulting in a three-year gap for students. 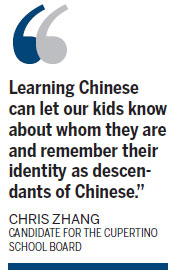 She was very proud of their students' language advantages and added: "Our program is designed to develop full bilingualism in Mandarin and English. English-speaking students and native Mandarin speakers are taught together using Mandarin and English instruction to develop bilingual academic fluency. After graduating, they can read, write and even speak Chinese very well."

But she was concerned that there is no public middle school in Palo Alto providing a Chinese immersion program.

"Having my children learn Mandarin is a key for preparing them for a global future, personally and professionally," one of the six parents told the media during last week's public comment session.

"My daughter will graduate from Ohlone Elementary School next year so now we're kind of struggling with how she continues her Chinese skills. We want her to have that gift through her lifetime," said the parent.

Cupertino, located about 12 miles from Palo Alto, has already expanded their immersion program into the middle schools, such as Miller Middle School.

"Learning Chinese can let our kids know about whom they are and remember their identity as descendants of Chinese," said Chris Zhang, candidate for the Cupertino School Board, adding that his daughter is currently studying in an immersion program in a preschool in Cupertino.

He also said that not just Chinese-American students are learning in the immersion program, but also some American natives are sending their children to the program.