The United States is the top overseas destination for Chinese shoppers and the first choice for a growing number of online shoppers who buy goods through the websites of foreign retailers, a report said on Thursday.

Chinese tourists prefer to travel overseas on the strength of their higher income and want to take advantage of the lower taxes that accrue when shopping abroad, the report said.

"Travelers from second- and third-tier cities in China and those who went abroad for the first time have made a major contribution to overseas consumption," said Fan Zhiyong, co-author of the report and associate professor at the School of Economics, Renmin University of China.

In addition, Chinese consumers spent $1,368 per capita on average in 2013, which was three times higher than the consumption foreign travelers made in China, said the report.

Ralf Zhu, a representative of USItrip, a Los Angeles-based Chinese travel agency, said shopping has been the prime driver for Chinese travelers to visit the United States.

"More than 50 percent of the Chinese travelers to the US want their tour routes to include some well-known shopping destinations," he said.

Like many other shopping malls in the United States, Bloomingdale's at South Coast Plaza, Los Angeles, is planning to attract Chinese customers by offering them customized shopping experiences.

Werner Escher, executive director of domestic and international markets of South Coast Plaza, said: "Chinese visitors are eager to enjoy the fruits of their tour, and they love shopping."

Meanwhile, Chinese shoppers spent 3.1 trillion yuan through online shopping in 2013. American retailers' websites were the most popular among Chinese online shoppers, while South Korean websites transactions were below average, said the report.

Factors including frequency of transactions and the money spent on each purchase have also been taken into account, it said.

Demand for luxury brands, a prime driver for overseas shopping earlier, saw a gradual tapering off, with more customers preferring to buy such goods from online platforms. 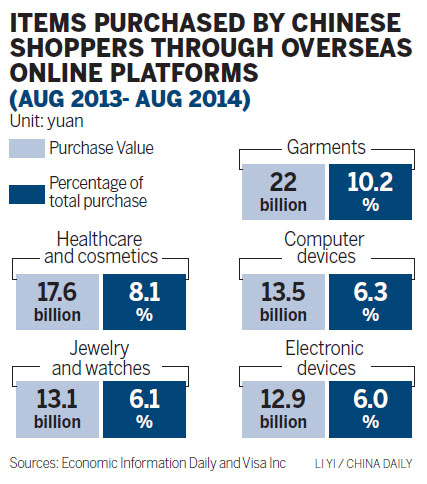