Healing through art at UN

It has been more than six years since the 2008 Sichuan earthquake killed almost 70,000 people and left nearly 20,000 more missing.

While many still struggle to cope with their losses, an art exhibit that opened this week at the United Nations headquarters in New York is giving survivors of the Sichuan earthquake a chance to display their artistic prowess.

The 5 Colours Foundation, started by Chinese artist Zhou Chunya in 2008, works to rehabilitate individuals who were injured or lost family members in the disaster. Since its inception, the group has provided support for nearly 200 students in and around Sichuan province.

Working with the Disability Welfare Foundation of Chengdu, the project's main goal is to provide survivors the chance to find a means of self-expression through art.

Donation-funded programs, including overseas art exhibitions, help 5 Colours' students build up their confidence, as well as an academic portfolio of their work. The group also maintains a scholarship fund to help its students attend college.

Kevin Wang, an 18-year-old senior at Poly Prep Country Day School in Brooklyn, New York, said that the sense of community provided to these students by 5 Colours' programs is invaluable.

"It's hard to move past dealing with something as tragic as the Sichuan earthquake, where children have lost parents and siblings," Wang said. "But art allows you to reinvigorate yourself with color and expression that would otherwise be lost."

Wang, who helped organize this week's event at the UN, said his family, friends and teachers have been "very supportive" of his efforts. 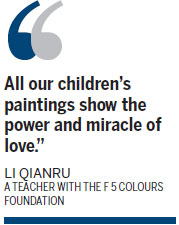 "My headmaster is here and some teachers too, so that really speaks to how much they've helped me out along the way," he said.

A group of students from the program were on hand for Monday's opening event, which runs from Nov 3-7. Nearly 150 guests attended the opening.

For some of the students, the trip was their first time to the US.

Li Dan, a 24-year-old former student of 5 Colours, said that without this foundation she would never have thought about painting, or going to New York to display her work.

"Paintings can be a way to express yourself," said Li, who lost her right arm in the earthquake. "For example, in Runnings, one of my paintings, I want to say that scars are not something to hide."

Li now works at an interior design firm in Chengdu, Sichuan province, thanks in part to her schooling with 5 Colours.

"Painting isn't just a cure for the body and soul, it also equips people with skills," said Li Qianru, a teacher with the foundation. "All our children's paintings show the power and miracle of love."

Wang, a senior at Poly Prep who served as the master of ceremonies at Monday's event, said early on his mother was interested in helping people affected by the Sichuan earthquake, which undoubtedly had an affect on his outlook.

"My mother first brought this foundation to my attention in 2008, when I was 12," Wang said. "At first, it was something where I could send some school supplies or some paintings. I was convinced I wasn't really helping because I could not send money, but I was reassured that whatever I did was helping and I just sort of stuck with it."

"What better way to help than with something you love?" Wang said.