The plan also says that an additional 30 GW or more of new nuclear power generating capacity will be under construction in 2020.

Fatih Birol, chief economist at the IEA, said on Monday that half of the 80 GW of nuclear power capacity now under construction in the world is located in China.

According to the IEA, about 45 percent of the growth in nuclear generation by 2040 will come from China, while 30 percent will come from India, South Korea and Russia.

In a Monday talk on the IEA's report World Energy Outlook 2014, Birol praised the recent climate agreement reached by Chinese President Xi Jinping and US President Barack Obama. He said China's nuclear energy plan will be important in reducing the share of coal in its energy mix, as well as in reducing emissions of carbon dioxide.

He said if other countries don't change their policies, China will overtake the US with the largest nuclear power capacity in the coming decades.

"By building a lot of nuclear power plants and bringing the costs down, we may well see China soon as a serious competitor to Western countries in terms of exporting nuclear technology," Birol told the audience at the Center for Strategic and International Studies in Washington.

Under the recent China-US climate deal reached during Obama's trip to Beijing, China will peak its carbon emissions by 2030 or sooner. China also pledged to increase clean energy sources to account for 20 percent of its total energy production by 2030.

The IEA report lists nuclear power as one of the few options available at scale to reduce carbon-dioxide emissions.

The Chinese government suspended the approval of new nuclear power projects and conducted a thorough review of its existing projects following the Fukushima accident in Japan in March 2011. But the pressure to reduce the reliance on carbon and fight the heavy pollution in Chinese cities has quickly put the nuclear plan back on track

According to the plan, efforts should be focused on promoting the use of large pressurized water reactors, high temperature gas-cooled reactors and fast reactors.

He said governments which are serious about investing in nuclear plants must listen to the concerns of their people and try to address them.

Birol also expressed concerns over the growing amount of nuclear waste and called for a concerted effort to find a permanent solution to the challenge.

So far, no country has opened a permanent disposal facility to isolate the most long-lived and highly radioactive waste produced by commercial reactors, according to the IEA report. 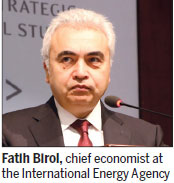 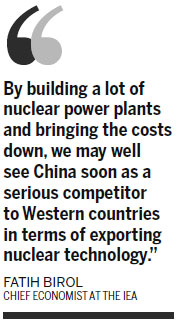