Longer stays expected to be further incentive for buying US properties

The Chinese have been buying premium real estate in the United States for some time. Witness the recent $1.95 billion purchase of the Waldorf-Astoria hotel in New York by a Chinese insurance company in October, or the regular purchases of high-end properties in cities such as New York and Los Angeles.

Now the Chinese have another incentive to purchase US real estate beyond prestigious addresses: the new 10-year visa for business travel and tourism, and the five-year visa for overseas study. 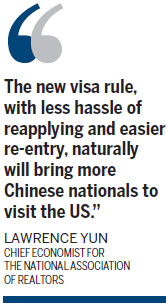 The US and China announced the policy change on Nov 10, during the Asia-Pacific Economic Cooperation meeting in Beijing. It went into effect on Nov 12.

"The reciprocal extension of visa validity to 10 years for short-term business and tourist travel between China and the United States will increase travel and exchanges, enhance mutual understanding between our countries, and benefit our economies by increasing the ease of trade and investment," the US State Department said in a Nov 10 fact sheet.

"Under the new arrangement, Chinese students will find it easier and more convenient to return home because in many cases they will not be required to obtain new visas prior to returning to the United States to study," the State Department said.

"The new visa rule, with less hassle of reapplying and easier re-entry, naturally will bring more Chinese nationals to visit the US," Lawrence Yun, chief economist for the National Association of REALTORS in Washington, wrote to China Daily in an e-mail.

"Some will want to visit for vacations and will thereby want second homes," he wrote."Chinese have already been making huge gains in purchases of US real estate, and this trend could easily accelerate further as a consequence of the new visa rule and from ever faster-growing GDP in China versus the rest of the world."

The new visa durations create a kaleidoscope of commercial prospects between the world's two largest economies - in real estate, education, tourism and business.

"It is a game-changer; since Nov 12, we've already seen a 35 percent increase in inquiry," Andrew Taylor, the co-CEO of Juwai.com, told China Daily from Hong Kong on Nov 19.

Juwai, which means "home away" in Mandarin, is a Chinese website for real estate buyers, headquartered in Shanghai, with another office in Hong Kong and one planned for Beijing.

"Here is the US government working with the China government on providing a jurisdictional incentive to encourage consumers to engage," Taylor said of the new visas. "We think that's the future of the world."

Juwai's data show that 60 percent of affluent Chinese citizens are considering moving overseas, and 85 percent of that same demographic want to educate their children away from home. The US is their top destination.

The average price of properties that users inquire about is $1.17 million, but they have budgets for purchases about $3 million on average, according to Juwai.

The US city with the most Chinese investment in real estate is Los Angeles, followed by New York, Atherton, California (an affluent Silicon Valley suburb), San Francisco and Dallas, according to Juwai.