Best Buy's decision to sell its retail business in China is the latest example of a multinational company overreaching in the country.

"China is a massive country, and it has certainly been a challenge for a lot of international retailers, particularly American retailers," said Maureen Atkinson, a senior partner with the JC Williams Group, a Toronto retail and marketing consultancy.

"A lot of companies are now looking outside their borders to other markets, a phenomenon we call the 'globalization of retail,' " Atkinson told China Daily. "We see companies like Best Buy, Wal-Mart and a lot others who start to hit the limits of their growth within the markets that they know best, so then they start looking beyond those markets.

On Thursday, Best Buy Co Inc announced it would sell its majority share in the Jiangsu Five Star Appliance Co to the Jiayuan Group, a leading Chinese real estate firm.

"It becomes very challenging in some cases for the companies to be as successful or successful at all in these new markets with the same formula that they've used in others," she said. "So it's not surprising that Best Buy would find the Chinese market to be a challenge as well."

Michael Pachter, a managing director of equity research with Wedbush Securities Inc, a financial services firm based in Los Angeles, said Best Buy's announcement means it will no longer be a retailer in China, though the company will continue to manufacture in China.

"Best Buy didn't understand the Chinese market, which is pretty clear from their presence and lack of growth," Pachter said in an interview with China Daily.

Pachter said the drivers for the American retailer are premium products like the electronics offered by Apple Inc, Samsung Electronics Co and Sony Corp.

"Best Buy's reason for being is to sell premium products at a reasonable price, not the off-brand versions," he said. "You can buy a very high-quality product for a lot less money without the brand name, and the Chinese are probably a lot savvier about that than the Americans. But Best Buy is not making a comment on the Chinese business climate here; they're making a comment on retail." 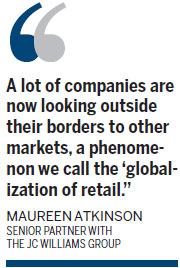 Pachter said China, Canada and Mexico are all markets in which Best Buy has seen headwinds.

The deal, which is still subject to regulatory approval, is to be finalized during the first quarter of 2016. No financial terms were released.

The Wall Street Journal reported in June that Best Buy was considering selling its China business in a deal that could net nearly $300 million.

Hubert Joly, president and CEO of Best Buy, said in a statement that the sale of Best Buy's interest in Five Star does not suggest "any similar action" in Canada or Mexico.

"Instead, [this move] allows us to focus even more on our North American business," Joly said. "Over the last two years, we have worked to improve our business in China and are proud of the progress we have made there."

Joly also said the company would continue to invest in its China-based private label operations, a group that includes brands such as Dynex and Insignia.

Best Buy, with its main office in Richfield, Minnesota, has more than 140,000 employees and operates in the US, Puerto Rico, Canada, Mexico and China.

Best Buy has more than 180 stores in China under the Five Star brand.

In 2006, Best Buy acquired a majority stake in Five Star for $180 million. At the time, Five Star was among the top five appliance chains in China. Founded in 1998, with its headquarters in Nanjing, Jiangsu province, Five Star began operating as a subsidiary of Best Buy in June 2006.

"There are lots of opportunities for Best Buy because they have a name, but a clear understanding of the customer and exactly how that customer thinks is really critical to success in any country," Atkinson said.