Prompted by China's efforts to reform healthcare and open the sector to more foreign investment, private-equity firms and medical institutions are looking to take advantage of the opportunities, report Linda Deng in Seattle and Wang Hongyi in Shanghai.

The numbers are staggering:

260 million Chinese suffer from cancer, diabetes and other chronic diseases.

Almost one-third of the population, or 438 million, will be over 60 by 2050, more than double the current number of 178 million, according to the United Nations.

13,440 public hospitals provided 90 percent of the country's medical services as of October 2013.

There are 1.4 physicians per 1,000 people, compared to 2.4 in the United States, according to the World Health Organization.

Beyond those numbers, China's healthcare system also faces corruption, often volatile relations between doctors and patients, rising middle and upper-middle-class populations that seek and can afford more sophisticated medical services and a huge disparity between rural and urban healthcare.

Though China's healthcare system has its merits, including cheap care and plenty of pharmaceuticals, the central government has made upgrading the system a priority - and an opportunity for foreign investors.

"China's gross domestic product has grown by leaps and bounds, but the quality of medical care has lagged far behind," David Chow, chairman of Harvest Medical Investment and Operation Group, a private equity-firm that planned to buy stakes in mainland hospitals, told Bloomberg Businessweek in June 2012. "The potential for China's hospitals to improve is massive, both in the overall number of beds and the fees charged for each bed."

As for hospital beds, China had 3.7 million in 2011, and the country wants at least one or two hospitals in each of its 2,853 counties by late 2015, a target that if reached could generate 400,000 new beds a year, according to some estimates.

Foreign-owned companies have only been able to independently invest in hospitals since January 30, 2014, when the government took the industry off a restricted list that required non-Chinese investors to have a local partner and capped foreign ownership at 70 percent.

In late August, the government opened the door even wider for foreign investment, allowing fully foreign-owned hospitalsp>Beijing views relaxing rules on private investment in the healthcare sector both as a way to offer more options for patients and as a boost for the reform of public hospitals, said Ellon Xu, a principal at Shanghai-based consultancy Bain & Co.

The changes have attracted overseas investors looking to take a share of China's healthcare market, including some US hospitals eyeing China for possible expansion because they face constraints on pricing from the government and health insurers, as well as public criticism.

Mergers and acquisitions in China's healthcare sector rose to a record $11.3 billion in the first 11 months of this year, up 13 percent from $10 billion in the same period a year earlier, according to Dealogic data. And a number of deals have followed as a result of the central government's liberalization policy.

Earlier this month, the private healthcare-service provider DeltaHealth reached an agreement with Columbia University's cardiac surgery and cardiology division and Columbia HeartSource, to develop a heart center in Shanghai, the first of its kind in the city. It will explore the prevention and treatment of cardiovascular diseases, while also seeking to meet the specific needs of Chinese patients. 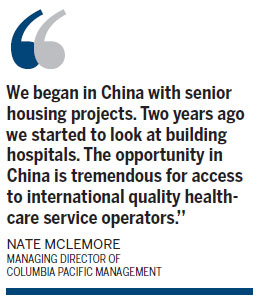 The 2013 China Cardiovascular Disease Report said that one in every five Chinese adults suffers from cardiovascular disease, while many others remain undiagnosed. It is a leading cause of 3.5 million deaths a year in China.

In September, p>Chindex was founded by Americans Roberta Lipson and Elyse Beth Silverberg who moved to China in the late 1970s. It p>UPMC, a hospital operator based in Pittsburgh, Pennsylvania, andHyperlink:=Harvard University, recently said they had signed or were exploring deals to manage or build hospitals in China.

After expansion over the past decade into Italy, Ireland, and the UK, UPMC announced in January that it was preparing to make its first move into China with "a wealth of potential projects".

"We are looking at China as one of our primary targets for expansion," Chuck Bogosta, president of UPMC's International and Commercial Services Division, wrote on its website. "To be a significant global health care provider, we know that we need to have a presence in the Asian market. The biggest challenge is finding the right partners."

UPMC said it had hired Travis Tuto to head its Beijing office. Tu, who spent nine years in China working for other hospital companies, said, "China's growing middle-class is starving for good, clean hospitals with patient-centered care and advanced technology."

On Nov 5, Seattle-based Columbia Pacific Management (CPM) - one of the largest healthcare providers in Asia - announced it was entering the Chinahospitalmarket.

CPM has strong ties to China. In 2011, its China senior-care affiliate, Cascade Healthcare, became the first foreign-owned company to receive permission to build senior-care facilities in China and now as facilities in Beijing and Shanghai.

The first Columbia Asia hospitalopened in Malaysia in 1994 and the network has grown to 26hospitalsin India and Southeast Asia. The hospitals are designed to serve Asia's rapidly growing middle class with modern and efficient multispecialty hospitals located close to where patients live and work.

CPM said it is focusing on large cities in China (Shanghai with 24 million people, Wuxi with 7.5 million and Changzhou with 3.5 million), with hospitals and clinics designed to serve wide-ranging medical needs of the country's fast-growing middle class.

The company's new China hospital arm, Columbia China, will start construction next year on two 250-bed multi-specialty hospitals, in Wuxi and Changzhou, and is actively pursuing other hospital opportunities through acquisitions and greenfield projects. The 250-bed hospitals are in the permit stage, and both are expected to open by early 2018. Each hospital will cost $80 million to $100 million and each will have 600 to 800 employees.

To further bolster its presence in China as the hospitals are built, Columbia Pacific said it will also open several multi-specialty and specialty outpatient clinics under the Columbia China name.

"We began in China with senior housing projects. Two years ago we started to look at building hospitals. The opportunity in China is tremendous for access to international quality healthcare service operators," Nate McLemore, managing director of CPM, said in an interview with China Daily.

"We want to support China's desire to improve private healthcare by playing a cooperative role in bringing together the best domestic and international resources in cardiovascular care to truly deliver a world-class, patient-focused heart hospital in China," Daniel Auerbach, chairman of DeltaHealth's board, said in an interview with China Daily in Shanghai.

Professionals from the Columbia University heart team will provide consultation and advice on developing high-quality clinical guidance and protocols, as well as physician and medical staff training and education in innovative cardiovascular procedures and patient care.

"The collaboration in developing the heart center will help explore an effective way of early intervention and assessment of medical outcomes that is unique to China," Ge Junbo, a professor at the Chinese Academy of Sciences, said in an interview. He is also the chief adviser to the medical advisory panel at DeltaHealth.

Late last month, Shanghai-based venture capital and private-equity firm Trustbridge Partners broke ground on a $500 million general hospital in Shanghai. Shanghai Jiahui International Hospital is 100 percent privately owned by Trustbridge. When the first phase of the hospital is completed in 2017, it will have 246 beds, with phase 2 bringing the hospital's capacity to 500 beds.

In October, Massachusetts General Hospital said it was in early discussions with two partners to build a hospital with 500 to 1,000 beds in China. The hospital said it signed a "framework agreement" with a Chinese hospital that specializes in traditional medicine and a Chinese investment firm, allowing the three parties to exchange financial information and work on developing a definitive agreement to open a facility in an island city close to Hong Kong.

Mass. General executives said the talks were preliminary and a final decision had not been made about whether to participate in the project, but that they hope to do so by next summer, according to the Boston Globe.

Harvard Medical School's-affiliated academic medical center would jointly manage the China hospital, with Mass. General and Guangdong Provincial Hospital of Traditional Chinese Medicine, a local healthcare provider. The hospital, which has a working name of MGH Hospital China, would be located in a special economic development zone on the island of Hengqin, part of the city of Zhuhai. The center would provide clinical care and support research and medical training programs.

China's growing number of middle-class and wealthy citizens are an attractive option for a US hospital or medical organization seeking outside sources of revenue. But trying to popularize Western-style hospitals that cater to the elite in China would face hurdles, including a shortage of doctors at private hospitals.

While health authorities acknowledge the shortage, their focus is on getting more doctors for rural areas. The National Health and Family Planning Commission set targets in 2011 for increasing the numbers and quality of primary-care physicians in these areas by 2020, in part through improvements in education.

p>At a local level, public hospital leaders are often reluctant to even share their best doctors. Only in August did Beijing become the first municipality to let doctors work in more than one place without permission from their boss.

"Some government-owned hospitals are hampering doctors somewhat from going outside," Charles Elcan, president of Chinaco Healthcare Corp (CHC), told Reuters in October 2014. CHC's 500-bed hospital in the eastern city of Cixi admitted its first patient in July. "Some are very much open and support it, and some of them don't," added Elcan. "It's an ongoing challenge."

The Cixi hospital, a joint venture with local government, is operating at just a fifth of its capacity for in-patients, and is looking to recruit more doctors. CHC has invested close to $163 million in the project and is looking at other hospitals for acquisition and development.

The Trustbridge-invested hospital, known as Shanghai Jiahui International Hospital and due to be completed in 2017, planned to bring Chinese doctors from North America and use US management techniques to help reward and retain staff, said Gilbert Mudge, president of Boston-based hospital group Partners HealthCare International, which is a consultant to Jiahui.

Chindex in 2006 launched a pilot insurance program, but at $5,000 per person per year, the annual premium is still too steep for most locals.

As a result, while almost half of China's 24,700 hospitals are private most healthcare is still delivered by public institutions, with some 84 percent of in-patients using public facilities, according to a Deutsche Bank report in June.

"Investing in China's health sector faces many challenges," Yanzhon Huang, a senior fellow for global health at the Council on Foreign Relations, said in a New York Times article on Dec 10. But he added that more private investment would benefit the entire sector, including troubled state-funded hospitals.

"Increased competitive pressures would incentivize the public hospitals to kick off more meaningful reform efforts," he said. "Private investment can play an important, even critical, role in China's healthcare reform.

No judgment yet on Sony; evidence awaited