Chinese Foreign Minister Wang Yi said there are four principles that should be upheld in the development of international relations in the 21st century.

Wang, speaking Monday at the latest United Nations Security Council open debate, said that countries should "uphold peace and prevent conflict", "opt for cooperation, not confrontation", "make sure that justice - not hegemony - will prevail in the world", and "work with each other with a win-win, not zero-sum approach".

Echoing President Xi Jinping's vision for a new type of international relations with "win-win cooperation at its core", these four principles enrich the UN charter with new dimensions while being built on the original purpose of the charter, Wang said.

The council needs to "forestall conflict and act in a timely manner to stop warfare so as to restore peace and promote reconstruction as early as possible," he said. At the same time, China views any unilateral action that bypasses the Security Council as illegal and illegitimate. 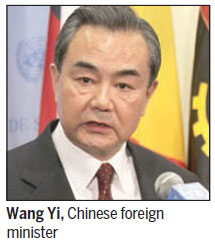 "China calls upon all countries, major countries in particular, to rally behind the need for greater international cooperation," Wang said.

Wang said that no country is entitled to impose its will on other nations or to topple other countries' governments.

"China maintains that all countries are equal, regardless of their size or wealth, and that all countries' sovereignty, independence and territorial integrity should be respected, and their choice of development path and social system be upheld," said Wang. "International law and norms governing international relations should be truly honored, and diversity of civilizations in the world should be respected."

Finally, Wang said that all countries should share obligations and uphold justice while "pursuing interests", so that the interests of individual countries and the wider international community are all "properly safeguarded".

Wang chaired the UN Security Council open debate - with China being the council's February president - that focused on the maintenance of international peace and security. This year marks the 70th anniversary of the founding of the United Nations and the victory over fascism, and the purpose of the open debate was to join hands with all countries to "draw lessons from history and chart the course for the future", Wang said. 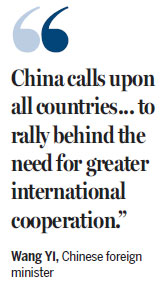 The defeat of fascism "profoundly" changed the world and the adoption of the Charter of the United Nations - the foundational treaty of the UN, signed in San Francisco in 1945 by 50 member countries - set an "ambitious blueprint", but the "beautiful vision as set forth in the charter is yet to be fully realized."

"Though a world war has been averted, local wars and various conflicts have been incessant, and non-traditional security threats such as terrorism crop up one after another; though the world economy has grown markedly, the gap between the haves and have-nots remains prominent and new global challenges, including climate change keep emerging," Wang said.

Ban Ki-moon, secretary-general of the UN, said in remarks afterward that nations "no longer have a full meeting of minds" on how to prevent armed conflict through peaceful settlement of disputes and protection of human rights, and therefore need to reflect on what has changed and how to build a greater sense of unity.

"We should use this year's observance of the 70th anniversary of the United Nations to seriously reflect on our common enterprise - on peace operations, peace-building, women's empowerment, disaster-risk reduction and much else," he said. "We should also seize this year's opportunities to take transformative action on sustainable development and climate change."

Anbang buys another piece of Manhattan

School, firm to link up in cancer fight

Highly skilled immigrant spouses can soon work in US