China will top the list of delegates for an upcoming US foreign direct investment summit with the most investors registered so far, said a US government official.

According to the registration tally, by Thursday morning, about 150 investors from the Chinese mainland and Hong Kong will attend the 2015 SelectUSA Summit, Vinai Thummalapally, executive director of the program, said at the US Department of State Foreign Press Center Thursday in Washington.

About 100 Chinese companies attended the first SelectUSA Investment Summit in 2013, a US government-wide program to promote and facilitate business investment in the US, Thummalapally told China Daily earlier this year.

It will "clearly make China the largest delegation of about nearly 80 delegations from around the world" for the second time in a row, said the former US ambassador.

The summit, initiated by President Obama in 2011, is part of the International Trade Administration of the US Commerce Department. The second SelectUSA Investment Summit will be held March 23-24 at the Gaylord National Resort and Convention Center in National Harbor, Maryland.

More than 2,500 businesspersons from nearly 80 countries have registered, doubling the size of the inaugural summit. More than 30 US ambassadors have confirmed they will lead delegations from their respective countries, according to the official report.

Stepan Selig, Under Secretary of Commerce for International Trade, dismissed the notion that investment from China is not welcomed in the US by saying that the US "has a free and open economy and is open to all investors" and will continue to actively "make progress" in bilateral trade negotiations.

Some concerns were raised recently when Reuters reported that Chinese investment is singled out in the US by the review process in the Committee on Foreign Investment in the United States (CFIUS), which put investors from China top of the 2013 list for national security reviews.

Selig said the sensitivities of CFIUS shouldn't "in anyway discourage Chinese investors in our country" and the US will continue to address it and work with our Chinese side.

"Given the growth in Asian markets," he said, "I think it underscores the opportunities for those markets."

In the fourth quarter of 2014, Chinese firms spent $3.7 billion on 30 FDI transactions in the US, bringing total Chinese investment for last year to nearly $12 billion, which topped the $10 billion mark for the second year in a row, according to the latest report from consultancy Rhodium Group.

A strong base for 2015 is expected with more than $3 billion in deals currently up in the air and several large, multiyear greenfield projects in real estate and other sectors started last year, the report said. 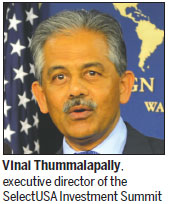 Daniel Rosen, a partner at Rhodium Group, said earlier this month that the FDI from China would continue to expand.