The "One Belt and One Road" initiative will help connect China with the rest of the world, and the initiative "follows the trend of economic development," according to Bank of China Chairman Tian Guoli.

"President Xi Jinping's proposal of the 'One Belt One Road' initiative is following the trend of economic development. The epicenter of development will move toward the East ultimately, and Xi is just summarizing this trend," Tian said in a press briefing in New York on Monday.

"We have been playing the role of a bridge. The word 'banker' comes from Italian, which means 'chair': We sit together and chat, and then the opportunities will come. But now, we may have forgotten its original meaning," he said. "The bank should act as the role of a bridge and an intermediary between different enterprises. So the Bank of China is more than willing to use the next hundred years to serve the construction of 'One Belt One Road' by using the financial network we have built."

The New Silk Road Economic Belt and 21st Century Maritime Silk Road, proposed by Xi in 2013 after visiting Central and Southeast Asia, is meant to promote economic prosperity in the ASEAN region. Its purpose is to "strengthen exchanges and mutual learning between different civilizations," according to the official action plan of the initiative.

There are 65 countries and a population of 4.4 billion people along the new economic belt, but economic output is only $21 trillion, about 20 percent of the world's total, and Tian said that represents a major opportunity.

The region is "not very developed," Tian said, "but being underdeveloped also means great opportunities ahead. The US is highly developed, but what else can you do in the US? There's not much left to do, but for these regions, it's different."

There is a lot of demand for resources and products, much more than there was back when economic development in the region was slower, he said. "Today, China as the center of the 'One Belt One Road' initiative has enough production capability" to help the region, he added.

Many projects have begun, including harbors being built in Sri Lanka and some $26 billion worth of infrastructure projects in Khazarkstan. 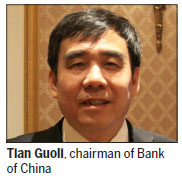 "The Chinese have a saying that 'if you want to get rich, you have to first build the roads.' But infrastructure needs money and forward planning, and the 'One Belt One Road' is planning," he said.

Bank of China, which saw $8.66 billion in overseas profits in 2014, said that it will add renminbi clearing channels to the economic belt initiative, further expanding the use of renminbi at a time when the currency is already one of the most often-used in the world.

"With the development of 'One Belt and One Road' and the increasingly close ties with China, people prefer to use renminbi," said Tian.

Lu Huiquan and Hong Xiao contributed to this story.

US 'willing to work with AIIB': Lew

Washington 'willing to work with AIIB'

One dead, two hurt as vehicle tries to ram US spy agency gates