US Secretary of State John Kerry will visit China this weekend in preparation for the upcoming Strategic and Economic Dialogue (S&ED) and the planned September visit to the US by Chinese President Xi Jinping.

The State Department said Monday that Kerry will meet senior Chinese government leaders May 16-17 to advance US priorities ahead of the S&ED and Xi's visit.

In the Monday briefing, acting spokesperson Marie Harf didn't say whether relations with Japan and historical issues will be discussed during Kerry's visit. "We'll get you more as we get closer," she said.

Pyongyang's KCNA news agency reported on Saturday that North Korea leader Kim Jong-un oversaw the test-launch of a missile from an offshore location, triggering strong reactions in South Korea, the US and other countries in the region.

"It is hoped that all relevant parties will do more to ease the tension and jointly uphold the peace and stability of the Korean Peninsula," Hua said in the Monday briefing in Beijing.

Cheng Li, director of the John L. Thornton China Center at the Brookings Institution, believes there are challenges both on the economic and security fronts between China and the US. He believes neither side wants to create a kind of confrontation from the Asia Infrastructure Investment Bank (AIIB) and Trans-Pacific Partnership (TPP).

There has been much hype lately about how the launch of the AIIB initiated by China represents a win for China and a defeat for the US and how the TPP led by the US is aimed at damping China's growing economic influence in the region.

While not sure about a major breakthrough being achieved on the issues of the South and East China seas, Li believes talks are more likely to focus on North Korea and Iran, both of whom are trying to develop nuclear capability.

"There has been more noise in both countries lately, but leaders are clear-headed and calm," Li said.

Douglas Paal, vice-president for studies and director of the Asia Program at Carnegie Endowment for International Peace, believes the Iran nuclear issue, the Middle East in general, the US-Japan defense guidelines, talks to restrain North Korea's production of fissile material and the South China Sea will be discussed. And the AIIB might come up.

"The US would like to conclude the draft MOU on contacts between military aircraft in the air and ships at sea, and will seek further cooperation for the Paris conference on climate change beyond the important joint announcement during Obama's state visit last November," he said.

"There is further hope to build on the cyber-crime initiative begun during Homeland Security Secretary (Jeh) Johnson's recent visit," he added. 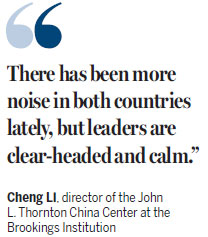 In the Monday announcement, the State Department said Kerry and Treasury Secretary Jack Lew will be joined for the 7th session of the China-US S&ED in Washington in late June by their respective Chinese co-chairs, State Councilor Yang Jiechi and Vice-Premier Wang Yang.

The dialogue has been an important platform for the two countries to focus on the challenges and opportunities that both face on a wide range of bilateral, regional and global areas of immediate and long-term economic and strategic interest.

The CPE promotes and strengthens people-to-people ties between the US and China in the fields of education, culture, health, science and technology, sports and women's issues.

Both S&ED and CPE, along with visits by senior leaders, are regarded as vital avenues to build up mutual trust between the two nations.

Former NASA administrator Sean O'Keefe said on Monday that what consistently stymied the ability to broaden that range of exchange (in space) have been the deep suspicions on both sides of what each other's intentions are.

French president calls for end to US embargo on Cuba