A committee of Japan's lower house passed controversial security bills aimed at beefing up the role of Japan's military on Wednesday, despite strong domestic protests and concerns among neighboring countries.

The approvals, after a vote sought by Prime Minister Shinzo Abe's ruling bloc, paved the way for a lower house vote, probably on Thursday. If passed, the bills would then be debated in the upper house. The ruling bloc dominates both houses of the Diet, Japan's legislature.

Observers said that if the bills become law, it would mark a historic shift for the officially pacifist nation, and such a move would require vigilance from Japan's neighbors, including China and South Korea.

The vote coincided with Beijing's announcement that Shotaro Yachi, the head of Japan's National Security Secretariat and a key foreign policy adviser to Abe, will visit China from Thursday to Saturday.

If enacted, the bills will allow the Japanese Self-Defense Forces to engage in armed conflicts overseas and help defend others, even if Japan is not attacked, under a policy called collective self-defense.

An expanded role for the Japanese military would mark a key departure from Japan's pacifist Constitution, especially the war-renouncing Article 9, which bans the country's armed forces from fighting overseas.

Lyu Yaodong, an expert on Japanese policies at the Chinese Academy of Social Sciences, said the bills are warfare legislation presented as being in the name of peace.

The proposed measures go against the peaceful path that Japan has followed over the past decades, he said.

Polls by Japanese media show that the bills are unpopular among academics and the Japanese public.

That tension was on display on Wednesday as hundreds of protesters chanted anti-war and anti-Abe slogans outside the parliament.

The legislation is far from being widely understood by the general public, Asahi Shimbun newspaper said in an editorial on Tuesday.

"We believe the Diet deliberations on the bills have failed to address a slew of fundamental questions, not just issues concerning constitutionality but also ones that are important from the viewpoint of how Japan's safety should be secured," the newspaper said. 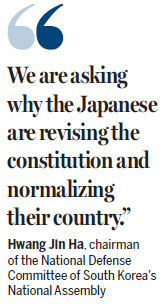 Huo Jiangang, an expert on Japanese studies at the China Institutes of Contemporary International Relations, said the bills are likely to become law despite Abe's falling poll ratings.

US State Department spokesman John Kirby described the Japanese security legislation as a domestic matter for Japan to speak to.

"We certainly welcome, as we've said before, Japan's ongoing efforts to strengthen the alliance and to play a more active role in regional and international security activities, as reflected in our new guidelines for US-Japan defense cooperation," he told a daily briefing on Wednesday.

Former South Korea foreign minister Yu Myung-hwan said in Washington on Wednesday that some people in his country have voiced concerns and worries over the Japanese moves. But he thought it would benefit South Korea against the threat from North Korea.

"We are asking why the Japanese are revising the constitution and normalizing their country," Hwang Jin Ha, chairman of the National Defense Committee of South Korea's National Assembly, said on Wednesday at a seminar at the Carnegie Endowment for International Peace.

Abe's ruling bloc, which consists of his Liberal Democratic Party and its junior partner the Komeito Party, has two-thirds of the seats in the lower house.