By Zhang Yunbi in Beijing, Chen Weihua in Washington and Cai Hong in Tokyo(China Daily USA)

Beijing lodged a strong protest against Tokyo's legislative campaign to lift constitutional restrictions on Japan's armed forces, describing them as "unprecedented" during a meeting on Thursday.

State Councilor Yang Jiechi made the representations while co-hosting the talks in Beijing with Shotaro Yachi, the head of Japan's National Security Council and a key adviser to Prime Minister Shinzo Abe.

Japan's ruling coalition pushed its contentious package of security bills through the lower house of the Diet, the country's legislature, earlier in the day despite a boycott of the vote by most opposition members.

Yang noted that this year marks the 70th anniversary of victory in both the War of Resistance against Japanese Aggression (1937-1945) and the world's anti-fascist war.

At such a moment, Japan should "respect the major security concerns of Asian neighbors and refrain from doing things that do not facilitate regional peace and stability", Yang said.

He said Japan's proposed adjustments to its military and security policies are "not in accordance with the trend of the current era". Japan is inviting questions over whether it plans to break away from the policy of focusing on self-defense, Yang said.

The Seoul-based Yonhap news agency warned that the bills "would allow the conservative Shinzo Abe administration to reinterpret the Constitution and expand the country's military role abroad".

Yonhap quoted South Korea's foreign ministry as saying that Japan should "stick to the spirit of the pacifist constitution".

Ted Carpenter, a senior fellow for defense and foreign policy studies at the Washington-based Cato Institute, said that though Japanese public opinion remains divided on the move toward so-called collective defense, fearing that it might entangle Japan in other nations' disputes, a significant domestic faction insists that Japan is now merely acting as a "normal" major power.

"It is clear that Tokyo intends to become a more active player in the security arena, involving itself in arenas far distant from the Japanese homeland, such as the South China Sea. That development is certain to arouse concerns and suspicions among some neighbors of Japan," he said.

He said it is imperative for Abe and other officials to reassure Japan's neighbors, by actions as well as words, that there is no intention of reviving Japan's militaristic, imperial past.

"Providing such credible reassurance will be perhaps the most crucial challenge for Tokyo," Carpenter said. "Without the adoption of a clearly conciliatory foreign policy, the ongoing boost in Japan's military power will increase apprehension and instability throughout East Asia."

Lyu Yaodong, an expert on Japan's foreign policies at the Chinese Academy of Social Sciences, said the bills will have a "tremendous impact", as they will make Japan "the biggest variable in the Asia-Pacific region".

Lyu warned that "Japan's military expansion is inevitable", though it claims it simply wishes to protect its allies.

Zhiqun Zhu, professor of political science and international relations at Bucknell University in Pennsylvania, said he does not believe China needs to be overly concerned.

Zhu, who has spent the last few months in Japan, said the Japanese public is pacifist and anti-war. "Even if the bill becomes law, in reality any future leaders of Japan will face tremendous obstacles to enact it in terms of sending combat troops abroad," he said.

Zhu also noted that whether Japan will depart from its pacifist Constitution and become more militaristic in the future has a lot to do with whether the US, in the name of its "pivot" to Asia, will push Japan hard down that road. 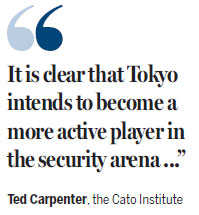 "In this sense, a healthy US-China relationship is crucial in ensuring that Japan will remain a peaceful nation," Zhu said.

Katsutoshi Kawano, chief of Japan's Self-Defense Forces' Joint Staff, on Thursday described the new security bills not as to unleash the Japanese military power but to strengthen the US-Japan military alliance.

He told a seminar in Washington that Japan is looking at the possibility of conducting patrol and surveillance in the South China Sea, depending on the situation there.

The meeting in Beijing between Yang and Yachi came after their first meeting in November, a time when relations between the countries were at a low point. After that meeting, the two governments released a landmark four-point consensus intended to improve their strained ties.

Thursday's meeting was the first held as part of a newly established, high-level political dialogue. A statement released afterward said both sides agreed that initiating the dialogue is "a major measure for both countries to enhance high-level strategic communication" and will help to achieve consensus and manage and control differences.

"It is hoped that the two sides will maintain political dialogue and the momentum of the improving Japan-China relationship," Yachi said.