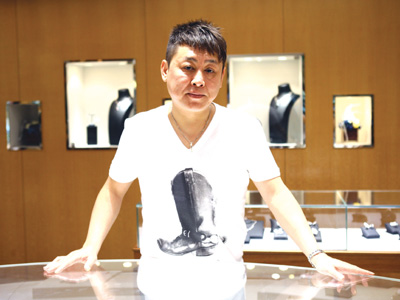 The facade looks a bit grubby. Grey cement steps and abandoned flower baskets lead to the entrance of a store in Solana, a middle-class area of Beijing, far from the city’s central business district where luxury fashion items are usually sold.

But this is a store that sells the ultimate in luxury fashion: diamonds. And not just a handful, but thousands of the precious gems – some loose but others set in rings and necklaces – together worth more than 100 million yuan (about $15 million). There’s even an exquisite four-carat yellow diamond worth more than 20 million yuan.

They all are part of the inventory of one of China’s top diamond dealers and investors, Wan Zihong. “Diamond is just another industry worth my investment,” he said. In the past six months, Wan has cut the retail price of diamonds in his store Meikelame, (M&L), which means “every carat is beautiful”, by 50 percent, and still earned a profit of 40 million yuan.

“Wan Zihong is selling diamonds like selling cabbages,” a market expert Ye Jian said as he laughed at Wan’s strategy. However, Wan’s plans seem to work, no matter what other say.

Wan said many other stores have to cooperate with certain jewelry brands to sell diamonds, and hand over 40 percent of the profit. “Now, I throw away the brand names and buy diamonds directly from the factories.”

Without a middleman, his profit margin is 33 percent, while the average profit of other diamond sellers would be about 25 percent, said Wan, who lists himself as among the top three sellers in Beijing.

Since the middle of April, when the government started to curb soaring property prices through tough policies, large amounts of capital have moved into diamonds. “When a customer asks for loose diamond by the dozens, I know that’s another investor,” Wan said.

The Gems and Jewelry Trade Association of China said diamond sales reach 1 billion yuan in May, a year-on-year growth of 30 percent, while sales of two- to five-carats diamonds grew by 40 percent.

Wan said investors and wedding couples are bringing him a monthly turnover of 20 million yuan every month.

Like many other investors, Wan has not always been successful. In 1990, after returning from Japan with a business management degree, he started in the real estate and clothing industry, but went bankrupt in 1996.

“But this failure didn’t get me down,” he said, “Instead, it freed me to make bolder moves, since I already lost so much.”

Wan’s luck changed in 2001. He invested half a million yuan to build a specialized women’s outlet in Beijing, and earned 27 million yuan after just one month; in 2005 he put a few million into two golf stores and earned 10 million yuan in two years.

Wan invests like a guerrilla fighter — once he conquers an area, he leaves it. Just before diamonds, Wan was in gold. “I cooperated with the state museum to design and produce high-end gold art craft and incorporated historical events into the design,” he said.

However, Wan’s profit was reduced by the high taxes levied by the government. “The tax is very high for gold sellers,” Wan said, “I paid a consumption tax of 5.5 percent and a value-added tax of 17 percent.”

Wan said he chose diamonds because they are a non-renewable resource, have a well-recognized evaluation standard by the Gemological Institute of America (GIA) and are appreciating by at least 5 percent a year. The value of a diamond depends on four standards – known as “4C” –color, cut, clarity and carat, Wan said. Now almost every diamond on the market has a GIA certificate, which will list every flaw.

He said diamond prices are going up because of reducing supplies. In May, De Beers, the world’s biggest producer of rough diamonds, announced that next year’s output will be cut to 40 million carats from this year’s 48 million carats.

At the same time, the Financial Times reported, demand for diamonds in China is growing by more than 10 percent every year, and China will replace the US as the world’s largest diamond consumer in 10 years,

Now Wan is exploiting the new rich in China, building a “millionaire palace” in his store, which sells diamond priced above 1 million yuan and will be open only to guests with a deposit of more than 5 million yuan. Recently the Industrial and Commercial Bank of China, ranked by the British magazine The Banker as the most profitable bank in the world, joined Wan in this millionaire project.

Red wine will be served and lectures on jewelry investment will be arranged, “Then I will sell my diamond ‘at an unbelievable low price’ to these wealthy customers,” he said.

Now 2,000 members are already in Wan’s books, and the palace will open at the end of this month.

Wan now has bigger ambitions: two other stores in Beijing this year and five more outside next year, all with the same style. “I want to be the Wal-Mart in diamond, the best retailer in this field,” he said.