Will Chinese replace English in popularity?

Some say it seems as if English's role as the most popular language in the world may be about to wane in favor of Mandarin. The hundreds of thousands of college kids and other language enthusiasts that pour into China every year are not surprising anymore.

According to Hanban, Confucius Institutes are already spreading the Chinese language and culture in 88 countries and 272 locations, reaching approximately 280,000 students.

Additional applications for the establishment of Confucius Institutes from 260 schools and colleges in 50 countries shows an optimistic trend, one that will no doubt continue.

On the other hand, as much as Mandarin is increasingly becoming a favorite of foreigners who flock to Beijing in droves in order to try to learn four tones and eight thousand unique characters, a look at the increasing number of job-offered ads with a requirement for excellent spoken and written English, confirms the capital's drive to popularize English in order to live up to its world-city aspirations.

Will the world drop English and adopt Mandarin? The answer, so far, is no.

It is unrealistic to ignore the switching costs: English has been in use for a while now and most of the knowledge and research from other languages is translated into English. 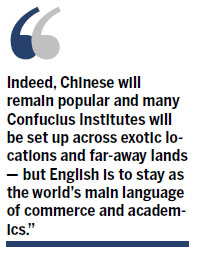 Most of the world's top businesspeople and leaders are already proficient in English, as is also reported in the British Council's "engco" model of "global influence" of the world's major languages which weighs languages not only in terms of number of speakers, but also the likelihood of the speakers venturing beyond their localities, entering new social networks, seeking to influence and to be influenced as well.

According to this model, English ranks first, followed by German, French, Japanese, Spanish, and Chinese.

Naturally, it would be irrational to believe that the world is going to capriciously drop English in order to adopt a new language just for the heck of it. This is why Beijing's drive to popularize English makes sense.

A dozen years ago, a "foreign friend" lost in a small town in some obscure corner of China would have faced different conditions. He or she would have approached the locals and ask in plain, non-accented English where he or she was and been greeted with blank stares.

Fast-forward to 2010 and things are extremely different, although foreigners can certainly still expect to struggle quite a bit unless they can speak a bit of Chinese.

Beijing's healthy desire to become a world city is already resulting in a surprising numbers of locals who speak decent English. But it's not just Beijing. All across China, English language proficiency is improving, from the lush fields of Maba in Guangdong, and the bustling commodities markets of Yiwu in Zhejiang to even the remote regions not mentioned in guidebooks.

This is hardly surprising. The pre-Olympic government initiative that taught conversational English to Beijingers was not a one-time event. The government recently announced a new ambitious five-year plan to enable all public servants in the capital to speak at least 100 English sentences - 1,000 for those with university degrees.

In 2007 alone, Beijing managed to improve 4,624 Chinglish signs around the city and teams of linguistic monitors are unwaveringly hunting more signs and notices that require remedial attention, including ones that read "mobile phone reflenishing gets stuck", "short for riding room", and "integrated fruit". But most English translations in Beijing and in the rest of China are acceptable.

China's importance will grow and so will its drive toward an international image that is not bothered with English proficiency. Indeed, Mandarin will remain popular and many Confucius Institutes will be set up across exotic locations and far-away lands - but English is here to stay as the world's main language of commerce and academics.