Getting a handle on flow of hot money 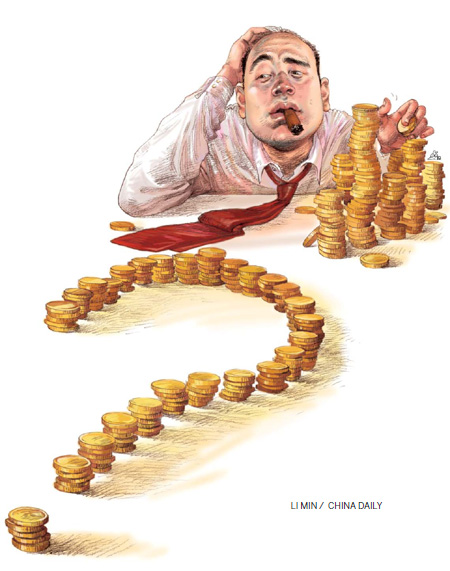 They have been blamed for pushing up housing prices to unaffordable levels and fueling a mining industry that is fraught with catastrophe. Yet, the image of investors from Wenzhou - one of the richest cities in China - could be about to change.

With policymakers attempting to better direct the flow of hot money, entrepreneurs from this famed East China metropolis are turning their attention to more sectors.

State-owned enterprises (SOEs) have for decades dominated infrastructure and clean energy projects, as well as the health, education and financial services sectors. However, government regulations issued in the last few months have opened the door to more private input.

Investors from Wenzhou, which sits on Zhejiang province's southeast coast and boasts about 400 billion yuan ($58 billion) in private capital, have been quick to get on board and are already drawing up ambitious plans.

One of them is Wu Lei, 58, who has been involved in advertising and property development for two decades. He is now planning to bid for a water treatment project in Heilongjiang province.

"We're all ready and poised for take-off," said Zhou Dewen, director of the Wenzhou Small and Medium-sized Enterprises' Development Association. "All we're waiting for is to see how the new policies are implemented by the ministries and provincial government."

Although some remain cautious, the government has assured that guiding private investment into public sectors is a priority for China's future economic reforms.

"We wouldn't be pushing up the prices of coal or property if there were better channels for us to invest," said Chen Xiaowu, a shareholder in Zhongqing Hengsheng Investment in Wenzhou, who said his company is considering to move into financial services. "The policy will benefit everyone if it is well implemented." 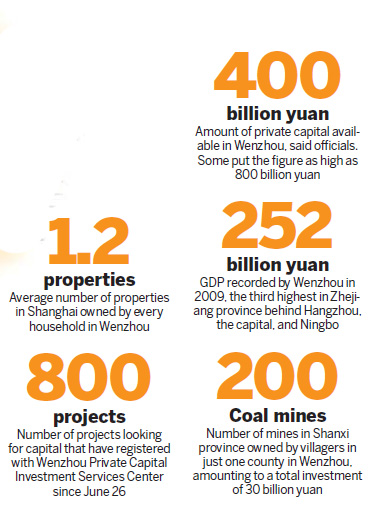 Following two notices about the policy in May, the State Council met on June 30 and released a statement emphasizing the need to "speed up reforms in sectors dominated by SOEs and encourage private capital to enter through mergers and acquisitions."

A report issued last month specified the ministries responsible for implementing the policy in various sectors.

"The gates are now open," said Chen, "but without detailed rules on how to enter and operate in each sector, most private investors will have to wait outside."

Developing private capital will help China's economy to become more market-oriented, say analysts. Yet, accomplishing this goal will not be easy.

Speaking about the financial sector, the boss of a credit company in Wenzhou who did not want to be identified said there are many rules defining private investment that do not fit with the new policy and urgently need changing.

However, Huang Fajing, board member of Rifeng Group, insisted the revised rules will level the playing field between private businesses and SOEs.

Wenzhou has a long history of manufacturing - shoes, leather, embroidery and blue china - and during the Southern Song Dynasty (1127-1279) was nicknamed "Little Hangzhou".

It was among the first 14 coastal cities opened to the outside world when China launched its ambitious reforms more than 30 years ago, prompting many residents to start small businesses with money from friends and relatives. The model is today regarded as the first example of capital investment in China.

Last year, the city recorded a GDP of more than 252 billion yuan, the third highest in the province behind Hangzhou, the capital, and Ningbo.

Although Zhang Zhenyu, director of the city government's financial office, says the city has around 400 billion yuan of private capital (excluding bank deposits), others put the figure in the region of 800 billion yuan.

Of the more than 80 recognized business sectors, 62 are open to foreign investment and 41 allow domestic private capital, said Zhou at the enterprise development association.

Improving the safety of how that money is invested and ensuring it reaches the right projects is an important job for the Wenzhou authorities, added Zhang.

After enjoying boom times in the 1990s, Wenzhou went through an economic transformation in 2002 when the government began closing small, inefficient workshops to rein in pollution. Since then, residents have pumped their money into coal mines, cotton plantations and oil fields.

According to local lawyer Wu Zuchun, by July last year villagers in the city's Pingyang county alone owned more than 200 coal mines in Shanxi province, amounting to a total investment of 30 billion yuan. Investment has also been made in the Inner Mongolia autonomous region, as well as Gansu and Guizhou provinces, all of which are rich in nonferrous metal reserves.

Chen Jiyan, who spent 15 million yuan on a coal mine in the Xinjiang Uygur autonomous region's Aksu prefecture in 2004, said his assets have since risen to more than 400 million yuan.

Properties in popular cities like Hangzhou and Shanghai has also been a major channel for speculation.

"Every household in Wenzhou owns an average of 1.2 properties in Shanghai," said Gao Lei, who runs a Wenzhou Computer Market Development, a company with about 100 staff. He owns 30 properties nationwide, including five in Shanghai. "It is a way to manage my wealth," he said.

Although investors like Gao have been blamed for creating the housing bubbles the Chinese government are now trying to deflate, Ma Jinlong, director of the Wenzhou Economics Study Association, argued that businessmen and women naturally go where the profits are.

"Their speculative investments in short-term, big-return projects have been dictated by China's economic structure," he said.

Yu Hui, a researcher with the Institute of Industrial Economics of the Chinese Academy of Social Sciences, said he feels the trend has been fueled by the investors' lack of confidence in long-term development projects, due largely to the sometimes-inconsistent government policies on private investment.

"Most sectors don't ban private investment," he said, "but in practice there is a glass ceiling. In some cases, private investors find it difficult to enjoy equal support."

In an interview with Xinkuaibao, a newspaper based in Guangzhou, Guangdong province, Wang Yusuo, chairman of ENN Group, complained that his clean energy project had failed to obtain government funding and support because his company is not State-owned.

However, 41-year-old Wenzhou entrepreneur Zeng Changbiao said he believes businesses that reflect the government's vision for sustainable growth will win out, even though the returns may be slower in coming.

He has pumped about 8 billion yuan into a real estate project in Huludao, a city in Northeast China's Liaoning province, which, he says, "is in accordance with the government's decision to propel the area's economy".

Speculative investments made without any awareness of policy and macro economic changes will not make a penny in the end, added Zeng, who is also chairman of the Zhejiang Chamber of Commerce in Liaoning, which has more than 200,000 members.

To prevent more coal mine accidents, the Shanxi government last year reshuffled the industry, demanding that small and medium-sized companies be merged.

The central government has also unleashed policies this year to cool down the overheated property market, meaning even more private capital is now burning holes in investors' pockets. "Capital just sat there waiting for the right investment opportunity," said Zhang in the city's financial office.

Conditions suggest this could prove a boon for sustainable, long-term projects.

After the two State Council notices, both the Ministry of Industry and Information Technology and the Commission for Science, Technology and Industry for National Defense have pledged to give private enterprises equal opportunities to bid with SOEs for military contracts.

He added that opening up the sectors that cover health and public facilities will increase supply and better meet the demands of residents.

Most industries involved, however, have a relatively high entry level that requires large-scale capital, according to Shi Jinchuan, a professor at Zhejiang University, which means the major challenge will be accumulating the scattered, small capital in the private sector to become a major investment force to rival SOEs.

Zhou Guanxin, director of the Zhejiang Federation of Industry and Commerce's research office, said authorities must adopt innovative measures to channel the money, such as setting up private equity funds.

Investors can also be encouraged into the SOE-monopolized sectors through joint venture projects, which will initially strengthen ties and help private firms gain valuable experience, he added.

Wenzhou Private Capital Investment Services Center was also set up on June 26 to act as a funding platform for enterprises seeking capital. More than 800 projects have already been registered, as well as over 60 investors offering a combined total of 20 billion yuan, according to Huang Jianshe, manager of its project department.

"That amount is only the tip of the iceberg in Wenzhou," he said. "Wenzhou people have enough money but not enough projects to invest."

The center is now working with Wenzhou officials on a program to funnel an estimated 2 billion yuan into a comprehensive tourism development, added Huang.

On July 29, the Bank of China Group Investment and Zhejiang Railway Investment Group also jointly set up a fund. Both injected 1 billion yuan each, with a view to attract more private capital for railway construction, the maritime industry, health care and new energy projects.

Entrepreneur Zeng Changbiao is among a group of 10 businessmen in Zhejiang province who have set up a private equity fund worth 1 billion yuan.

"We have already invested in a few new energy projects and some of them are expected to go public in the future," he said, adding: "How successful you become mainly relies on your business acumen."

Hu Yuanyuan contributed to this story.