A city's 'personal connection' to failure

BEIJING -Why has Shantou, one of the first four special economic zones (SEZ) in China, failed to take off like the rest?

By any economic indicators, Shantou in Guangdong province has ranked at the bottom of the SEZs launched 30 years ago along the southern Chinese coast to attract foreign investment. It has even fallen behind some other boomtowns in Guangdong in terms of its economic size and growth, a phenomenon described by local media as a "fall of Shantou".

Ironically, Shantou has boasted one of the longest business traditions in China and is hometown to many internationally known entrepreneurs, including Li Kashing, one of the richest men in Asia.

While glitzy Shenzhen was only a fishing village three decades ago, Shantou became a treaty port in l861. Local officials are proud to cite Friedrich Engels, one of the founding fathers of the Communist movement, who wrote in 1858 that Shantou was then the only port in China with some commercial significance.

But for the past couple of years, officials and business people in Shantou have been searching for cures to stop their city from slipping further into oblivion. And surprisingly guanxi, or personal connections that local people hold dear, has surfaced to be one main problem to be fixed.

Guanxi is a pervasive social and economic practice in Shantou. Sun Guanghui, a top Party official in Shantou, said now everybody in a village or the city will have to conduct their daily lives more with the help of guanxi than by law. 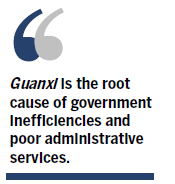 "When they want to do something, many won't first consider whether it's legal or not, but they will first think who's the person in charge they should know, or who can help them get to know the person in charge," Sun said in a speech at a local Party school that was posted on a government-sponsored online forum.

Years ago, when I worked in Shantou, I was amazed to see that disputing motorists in a traffic accident would first call their guanxi. The scene soon would be crowded with guanxi who knew somebody in the police and who would eagerly try to influence the decision of the officers in the days to follow.

Sun said guanxi is the root cause of government inefficiencies and poor administrative services. "As an unwritten rule, government staff will serve you if they think you have guanxi. Or they'll delay or decline."

Here is another example of how important the role of personal favors, loyalty and friendship plays in the local business culture. In 1992, Lin Xingsheng, the then local Party chief, worked hard to hammer out a deal with Texaco to introduce a mega petrochemical project. However, after Lin was promoted and transferred to Guangzhou, the project was aborted, a recent report in the 21st Century Business Herald newspaper said.

"Five years on, officials from the National Development and Reform Commission were still asking me, why didn't the project begin after it went through all procedures," Lin was quoted by the paper as saying.

Local officials admitted that guanxi taking precedence over law has affected the investment environment as well as local businesses. So far, Shantou has brought in merely $7.8 billion in overseas investment. It has approved about 5,800 foreign-invested companies since 1981 but only about 1,000 are still operating.

Paradoxically, people from Shantou have long been known to be entrepreneurial and possess an uncanny business sense in making quick money. And it seems such traits in a business culture based on guanxi instead of a legal code, can be self-destructive.

In 2000, hundreds of local companies were found to have been involved in massive tax frauds. One year later, the city rocked the nation again as the central government cracked down on rampant smuggling in the city that eventually sent dozens of smugglers to jail.

The ensuing economic slump had also triggered an exodus of local companies to rival cities.

It's reported that in an ambitious plan to rejuvenate the local economy, the Shantou SEZ plans to expand to include the adjacent island of Nan'ao for Taiwan investors. The island is about 160 miles (256 km) from Kaohsiung in Taiwan.

But Shantou will have to try hard to break free from the stranglehold of the guanxi culture that has become a major source of inefficiency in economic development. Guanxi can also breed corruption as it often results in favors that are expected to be returned in the future.