As the dolphins swam by and frolicked among the waves, cheers erupted from three nearby motorboats.

The cameras flashed and clicked as the majestic creatures dived deeper in the shallows of Qinzhou's Sanniang Bay in the Guangxi Zhuang autonomous region, before darting, almost teasingly, away.

Although called humpback dolphins and categorized in marine biological terms as being part of the Sousa genus, those in Sanniang Bay are distinctive sub-species called Sousa chinensis, or the Chinese White Dolphin.

The marine mammal, whose cousins live along the Chinese coast in the Pearl River Delta, Leizhou Peninsula in Guangdong province, Xiamen harbor in Fujian province and Taiwan island, is unique to China and listed in the State's top wildlife protection category.

"It's not often you see so many of them gather together and get so intimate with each other," said Chen Mei, a doctoral student at Peking University, who is studying the impact of environmental changes on the natural habitat of the dolphin.

While filming the dolphins playing and making notes, she looked up and frowned at the sight of several large fishing boats not too far away.

"By local law, ships are not supposed to get so close to the area where the Chinese white dolphins live," said fisherman Huang Xiaode, 30, as he steered the motorboat towards a collection of bubbles made by the sea mammals. "We've seen a dolphin with a deep cut a few inches down his neck. A fishing boat cut him a few years ago."

Still, over the years the gentle waters of Sanniang Bay have remained a relatively quiet sanctuary for the Chinese white dolphin. They have been least affected by economic development.

However, Pan Wenshi, a professor who earned international acclaim for his research on giant pandas and their natural habitat in the Qinling Mountains of Shaanxi province, is worried.

"The whole area is on track for rapid industrialization in the coming years," he told China Daily in an exclusive interview, adding that he believes Qinzhou could be transformed into another Shenzhen, a major industrial hub in neighboring Guangdong.

This year, the Guangxi government officially unveiled plans to develop Sanniang Bay into a marine and ecology tourism zone. Its development is an integral part of the Pan-Beibu Gulf Economic Zone mapped out by a national plan released two years ago. The goal is to turn the area into a new growth engine for the country.

Under the national plan, Pan-Beibu Gulf Economic Zone will include a new industrial base with ports, oil refineries, iron and steel and petrochemicals plants, paper mills and other facilities.

Qinzhou's 2010 development plan, which was adopted in March during the annual session of the local people's congress, also stipulates eight ambitious priorities for the city.

It includes construction of a core industrial zone, international port, transport hub and logistics center for trade between China and members of the Association of Southeast Asian Nations. The plan also aims to turn the city into an international tourist destination that is livable and suitable for business.

To accomplish the goals, officials are going all-out to attract investment and increase its soft power by promoting cultural projects.

Since March, authorities have injected 30.6 billion yuan ($4.4 billion) to kick-start 84 new projects and continue construction on 186 others.

Sanniang Bay is squeezed between Beihai city in the southeast and Qinzhou Bay in the west, the latter of which is now a tax-free zone that is being built into a deep-water port, a manufacturing base for machinery, electronics, textile, construction materials and a logistics center for trading in machinery, high-quality paper, petroleum, edible oil and alloy and chemical products.

"Development is the priority not only in China but also in the whole Southeast Asia and no force can pull it back," said professor Pan. "What I'm working on now is to make sure Chinese white dolphins and their natural habitat will be conserved along with the industrialization."

The Qinzhou government has also vowed to ensure a win-win outcome for both the economy and the rare marine mammals. On Aug 17, Mayor Xiao Yingzi invited Pan and his team to join her on a special tour of Sanniang Bay to choose the site of a new center for research on the Chinese white dolphin.

During the tour and at the dinner party that followed, Xiao repeatedly assured Pan of the city's resolve to protect the dolphins and their sea habitat as Qinzhou gallops into modernization. However, both involve huge challenges.

The number of Chinese white dolphins in the Pearl River Delta, Xiamen harbor and off the southwestern coast of Taiwan has dwindled in the past few decades.

At one time, as many as 20 populations were thought to exist but "only five populations are known to remain today in coastal Chinese waters", according to Lindsay Porter, a marine biologist with the Sea Mammal Research Unit at St Andrews University in Scotland. "The information we have shows each population has problems that are currently not fully understood."

The five populations are isolated from each other because the distance in between is too far for them to converge.

"The habitat is becoming increasingly degraded and there seems little chance for all populations' long-term future unless effective conservation action occurs now," said Porter, who studied the Chinese white dolphin for several years in Hong Kong with support from the World Wildlife Fund.

At the 58th annual meeting of the International Whaling Commission (IWC) in 2006, Pan, Porter and other researchers called attention to the imminent danger faced by the Chinese white dolphin. They pointed out that shipping and the development of the coastal economy have adversely impacted dolphins in the Pearl River estuary and Xiamen harbor, even causing deaths.

In Hong Kong, for instance, on average one white dolphin gets stranded every month, according to a paper presented to the IWC by a team of scientists led by Pan. Meanwhile, other studies showed the number of marine mammals in Xiamen harbor almost halved between 1994 and 2004.

In April this year, Lee Pei-fen, director of Taiwan University's institute of ecology and evolutionary biology, was quoted by the island's media as saying there are probably fewer than 100 Chinese white dolphins now living off the province's coast.

"Of all known populations, the one that resides in Sanniang Bay appears least effected by anthropogenic activities," reads the scientists' paper to the IWC.

However, the experts did raise concerns over the city's development plan.

Sanniang Bay was open as a tourist destination in early 2004 and asphalt roads already connected the former fishing village with major cities in Guangxi. Qinzhou had also started work on building a paper mill and a huge oil refinery.

The paper recommends the authorities ensure "all measures are put in place to prevent the environment, and the species that dwell within, from being detrimentally impacted", and to promote the marine mammal "as a flagship species for the conservation efforts of Sanniang Bay habitat."

Four years after that meeting, the entire Qinzhou Bay area is a construction site, with the oil refinery and paper mill in their second phase of expansion.

Compared with more popular tourist sites like Sanya in Hainan province, where hotels are almost lined up along the seaside, Sanniang Bay is still under-developed. There is only one hostel and a number of seafood restaurants close to the shore.

With its pristine nature and the chance to see dolphins in the wild, Sanniang Bay is growing in popularity. Since 2008, the bay has attracted more than 1 million tourists a year, with the crowds reaching almost 100,000 a day during peak seasons.

As many as 10 motorboats carrying roughly 80 tourists can often be seen in the bay, said student Chen Mei.

Fishermen and villagers said they are witnessing many changes.

For generations, Huang Xiaode's family has made a living by fishing in the bay. He learned to fish when he was young and has since become very knowledgeable about the dolphins. He often guides researchers like Pan out to the sea to study the dolphins.

Every day, Huang gets up at 3 am and goes fishing for grouper and other species, which he sells to restaurants. He then returns to the shore before 8 am to start work as a motorboat captain with a local tourist company. He usually makes four trips out to sea.

"There were a lot more dolphins years ago in Sanniang Bay," said the fisherman.

Pan and his team, as well as researchers like Chen, say they are ready to double their efforts to get to know more about the ecology of the Chinese white dolphin.

"No one should change a dolphin's habitat without being certain of the consequences," said Porter.

Pan added: "I hope when people visit here (Sanniang Bay) in two years they will see Qinzhou accomplish its two goals: Preserving the dolphins and becoming a new modern city." 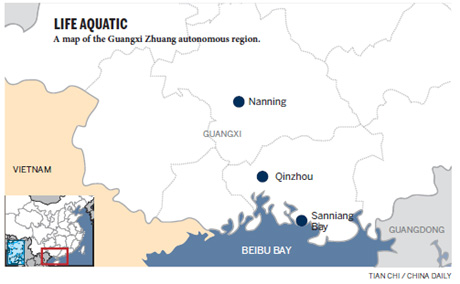