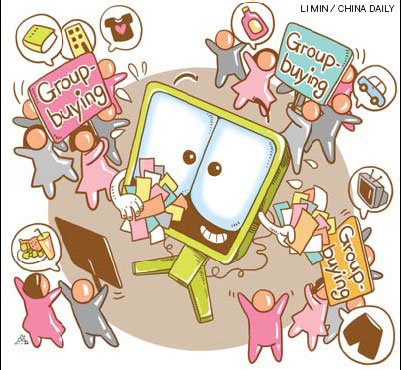 Student Wang Yuelu was surprised when her boyfriend took her to an expensive restaurant in an ancient Beijing courtyard, because she thought he was a penny pincher.

But she changed her opinion when she saw the restaurant's shimmering candlelight and the mouthwatering food on offer. He ordered a 400-yuan ($59) meal, which made her think even more of him.

It was only later that she found out he had paid less than 90 yuan and he admitted that he used a coupon he had purchased through a group-buying website.

Group buying, known as tuangou in China, is becoming extremely popular among youngsters like Wang and her poor boyfriend.

The websites offer discounted goods or services each day, but will only offer a discount deal if there are enough subscribers. It is a win-win business situation, in that shoppers pay less and retailers sell more.

"It saves a lot of money and you can buy nearly everything you want on these sites," says Wang, who studies at Beijing Foreign Language Studies University.

After the dining experience with her boyfriend, Wang started regularly visiting group-buying websites. Together with her three roommates, she stays up until 1 am every night to check for the latest discounts.

The Chinese group-buying experience builds on the success of the United States-based groupon.com, founded in 2008.

According to business magazine CBN Weekly, an average of four to five tuangou websites are being launched every day in China.

The popularity of group buying is attributed to the country's tradition of bargaining, sociologist Huang Shujun from Sun Yat-Sen University in Guangzhou says.

This traditional attitude toward buying goods has migrated from the real market to the Internet's e-commerce market.

These sites provide lower discounts than traditional stores. At the same time, they also offer a wider variety of products, ranging from restaurant coupons to trendy clothes.

The founder of kutuan.com, Fang Ziji, says his site is going to offer BMW5 cars to group buyers. "I think I can sell at least 100," he told CBN Weekly.

Not only products are provided, interesting services are offered too. Meituan.com offered a 90-minute skating ticket for 22 yuan, which was originally priced at 50 yuan. It quickly attracted nearly 5,000 subscribers.

A one-hour archery course priced at 28 yuan, a KTV coupon at 35 yuan, and a theater ticket at 40 yuan, were each originally priced at more than 200 yuan. The 300 yuan tickets to Modern Sky Music Festival, in October, are being offered for 170 yuan.

Ayatuan.com, the largest group-buying site in China, now has eight secondary sites, and three branches in Beijing, Shanghai and Shenzhen. It has more than 100 employees.

One of the founders, Huang Zhihua, says "aya" is the cheerful sound a customer makes when they have found a satisfying discount. He hopes the site, as its name suggests, will always offer online shoppers surprisingly low discounts.

"Group buying can go anywhere, as long as there is a business," Huang says.

As opposed to group-buying sites in the US, local sites also target people living in smaller communities. Ayatuan.com offers different discounted products for customers who live in Beijing's Zhongguancun and CBD areas.

"The number of people in Chaoyang district is larger than a small city in the US. (Shopping this way) saves time and energy for the consumers," the founder Huang says.

There are some problems. At present, only small companies or restaurants want to work with domestic group buying websites.

Hu Jundong, a salesman at manzuo.com, tried to interest KFC and McDonald's in the idea, but was rejected as soon as he reached their marketing departments.

"Some mature companies have their own coupons. At the same time, they don't give lower discounts, because it may make consumers think they are not high-end," says Luo Xurui, manager of a restaurant, who has refused all group-buying sites.

Since so many sites have launched recently, consumers have more choice, but the fast-growing market is chaos, ayatuan's Huang says.

Sun Yifen in Shanghai, for instance, bought some Estee Lauder cosmetics through a small group-buying site, but she later found they were fake products. And she has no one to seek redress from.

Huang from ayatuan.com says the government is now taking measures to oversee and regulate these kinds of sites.