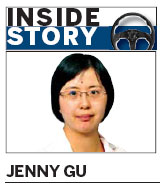 Some 1.5 million light vehicles were sold in China in September, the highest since March. The 19 percent year-on-year growth was beyond our expectations, as we had previously anticipated a slowdown into the single digits.

Passenger vehicle sales increased 24 percent to 1.1 million, with the largest growth coming in the luxury car, SUV and MPV segments.

This year the smaller vehicle segments have slowed as incentives abated, allowing the larger vehicles to move into the spotlight.

Light commercial vehicle sales grew 8 percent over the previous September to 359,000 units. We expect demand to remain steady through the fourth quarter.

Despite high inventory levels, manufacturers continued to increase wholesale sales to dealers. We believe in part to help stock for the weeklong national holiday in October.

Also, the 3,000 yuan subsidy for fuel-efficient vehicles has been cited as a successful means for dealers to attract customers, helping to stir passion for a purchase.

The higher-than-expected growth has made us rethink our long-term forecast for the auto market.

As a designated pillar industry for the country and with recent restraints on the overheating real estate sector, the auto industry is expected to maintain stable growth as stated in the government plan.

We now expect passenger and light commercial vehicle sales to increase 11 percent and 7 percent respectively in 2011, to 12.8 and 5.5 million units. Our long-term forecast has also been raised.

Some may think we are too optimistic, given the increasing number of complaints about the vehicles causing traffic jams and escalating air pollution.

However, we believe the government will strive to counter the challenges by shaping the industry in two ways.

One is to encourage vehicle purchases but limit the necessity of their use by improving public transportation. The other is to push demand toward more fuel-efficient vehicles.

The implementation of stricter emission standards and an increase in the vehicle and shipping tax are two ways we expect to see sales of fuel-efficient vehicles encouraged. We don't expect these to have a severe negative impact on demand in the medium term

Our increased optimism is shared by the automakers. As the majority of auto groups are running out of capacity, many are looking to grow.

The capacity utilization rate of the GM Group - including SGM and SAIC-GM-Wuling - reached as high as 128 percent this year.

As a result, there are huge capacity expansion plans underway.

Nissan already added a second Zhengzhou plant this year that increases capacity by 120,000 units and will soon another plant in Huadu with capacity of 240,000 units.

Even the local producers Geely and BYD, which have more available capacity, have released ambitious plans for expansion.

Facing such large expansion from the producers, are suppliers prepared for a 17 million unit market?

Our information indicates that output at some manufacturers was limited by suppliers rather than plant capacity.

Some key component suppliers prioritize supply for large automakers over smaller ones, including the local brands, leaving many wanting.

The expansion by car companies has also added pressure on suppliers to raise their game in other areas including quality assurance, cost effectiveness, project management, R&D, working capital and logistics.

Compared to the automakers, suppliers are more cautious on expansion. After all, the cost of stored capacity is less than that of overcapacity.

Faced with growing demand, suppliers appear to be opting for a compromise - expanding capacity moderately and preparing backup workers.

We can expect an improvement in supplier capability in the future, but should not rule out the chance that they will once again prove to be a bottleneck in feeding the rampant demand for vehicles in China.

The author is an analyst at JD Power and Associates