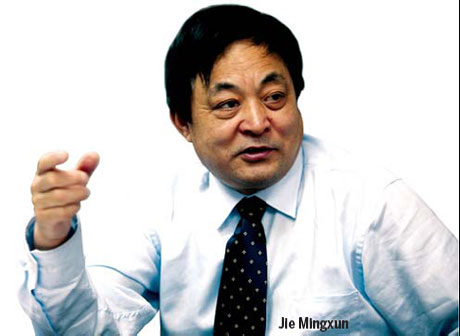 BEIJING - As energy demand continues to surge, the next few years will be crucial in the development of coalbed methane, according to Jie Mingxun, president of Petrochina CBM Co, in an exclusive interview last week.

PetroChina plans to spend more than $1.5 billion over the next three years to develop 4.5 billion cubic meters of coalbed methane (CBM) production capacity - almost double the country's entire capacity at the moment, according to Jie.

Among the projects are those in the Xinjiang and Inner Mongolia autonomous regions and Shanxi province.

By the end of 2009, annual gas production in Qinshui reached 200 million cu m, one-fifth of its capacity.

The first phase of the central processing plant with a designed capacity of 1 billion cu m has been built and put into use. Gas pipelines have yet been finished.

The exploration and development of CBM in East Erdos of Inner Mongolia has also made substantial progress, Jie said.

PetroChina's tenure area for CBM exploration and development in the Erdos Basin is 88,765 sq km, where geological resources shallower than 1,500 m depth amount to about 9 trillion cu m.

In 2009, new proven reserves reached 114.5 billion cu m in East Erdos, where a large-scale equipped gas field has been started.

Global oil giants are also rushing to get the last available slice of the CBM deposits in China.

Jie said Shell is seeking to cooperate with PetroChina to develop a CBM site in Erdos.

Besides, PetroChina and BP have already agreed to cooperate in CBM development in the Tuha Basin in Xinjiang. Foreign groups have long been involved in China's CBM industry, providing about 70 percent of the funding for early CBM exploration.

On the fifth anniversary of China's first commercial coalbed methane (CMB) project, the nation is falling well behind annual gas production targets, achieving only a quarter of its predicted 5 billion cu m.

"To enable CBM companies to profit from new wells, gas prices which vary in China, have continued the rise they have enjoyed in China so far this year," said Enviro Energy Chairman Kenny W Chan. The current price of natural gas has a floor of approximately 1.2 yuan/cu m with prices in most Chinese cities far above this level.

China has massive reserves of unconventional gas that could supply as much as 336 million cu m per day by 2030.

Coalbed methane alone could account for 14 percent of the domestic gas supply by that same year, according to the consultancy agency.

But key questions remain over how the unconventional sector will develop, and whether government policies will move fast enough to open up the sector.

By 2015, production is expected to reach 4.5 billion cu m. Around 2.8 billion will be self supported, and 1.7 billion will be the result of foreign cooperation, said Jie.

"Given the present economic conditions, CBM enterprises have encountered many disadvantages, for instance, the high cost of exploration and exploitation, low production per individual well and deficiency in economic performance,"added Jie.

"The bottleneck problem of CBM is the drilling technology of the oriented pinnate horizontal well," he said.

But many are still optimistic that production will soon pick up, thanks to government subsidies and a series of preferential policies.

At the end of 2008, the country's gas consumption was 77.8 billion cu m, representing a 16 percent annual growth. 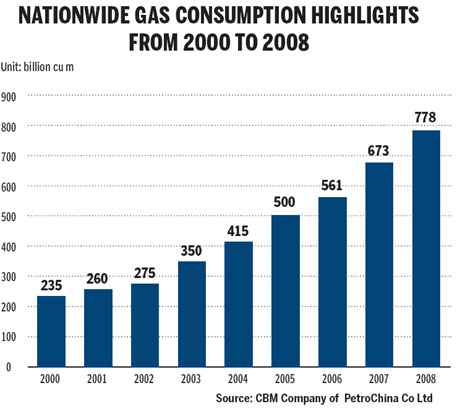