Journalists and hackers, in case you hadn't noticed, appear to have a lot in common. Think about it. Why should paparazzi spend their days and nights staking out a celebrity if all the facts, photos and more are on the subject's hard drive? In the Internet age our secrets are digital. Just ask Edison Chen.

A fictional case in point is The Girl With a Dragon Tattoo by the late Swedish author Stieg Larsson, that features a Goth-style female hacker partnering a reporter to expose a corrupt businessman and eventually Sweden's security services. The hacker provides the data, the reporter publishes. It's a match made in heaven.

But there's nothing stranger than non-fiction, as the case of WikiLeaks appears to confirm. Julian Assange and his company of whistle blowers have uncovered the secrets of scientology, released information on nuclear accidents in Iran, a banking collapse in Iceland, published real rather than "embedded" news from the wars in Iraq and Afghanistan, and much more besides.

And now there is the small matter of 251,287 confidential diplomatic cables from 274 embassies. What I have enjoyed most about them so far is their banality. Who knew that Silvio Berlusconi, Vladimir Putin and Jean Claude Van Damme team up to attend mixed martial arts fights? Or that the two leaders are even more intimate in the sauna and just punch each in the arms out of mutual admiration?

Apparently, Kazakhstan's prime minister is a bit of a raver and enjoys dancing "animatedly" by himself at trendy nightclubs. American diplomats reckon Azerbaijan's first lady doesn't have a "full range of facial expression" after substantial cosmetic surgery. Muammar al-Gaddafi is inseparable from his big-breasted, blonde Ukrainian nurse; and the French president ran around his office chasing a dog that was chasing a rabbit when he met the US ambassador.

It's like a circus, gossip on steroids, TMZ with top secrets. But isn't it about time these leaders who inflate themselves to heroic proportions were brought down to size? Shown up to be emperors without clothes. If power entails responsibility, great power should involve greater scrutiny. 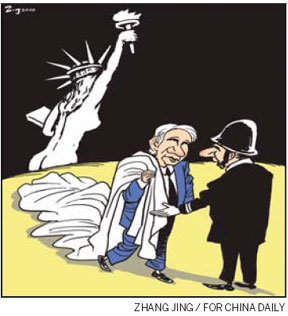 These WikiLeaks scoops were not served up by the world's major media outlets because they weren't doing their job, the news was too hot to handle, or because their owners are part of the establishment. The fact is old media is in bed with the very people it is supposed to be keeping its eye on. That's why the leaks are news and new media is setting the agenda.

WikiLeaks is not the product of any one country, therefore it reveals the truth of all. According to the organization's website (when it's up) it was started by Chinese, Americans, Europeans, Australians and South Africans, journalists, mathematicians and start-up company technologists. It was founded as, and has become, a genuine organization without frontiers, or political allegiances. It has embarrassed all countries and their leaders equally.

The divine comedy of the situation is that those who shout loudest about freedom of the press, the Internet and expression are precisely the same people now trying their utmost to shut down WikiLeaks.

This includes hack attacks on the site by US government agencies and denial of hosting services through Amazon, in addition to targeting the organization's funding and leadership, and setting up a secret grand jury. The prominent Republican, Mike Huckabee suggested "anything less than execution (for Assange) is too kind a penalty".

China and other countries block access to the WikiLeaks website, but this looks like small potatoes in comparison. It will be difficult for the US and its "coalition partners" with their WikiLeaks witch hunt to take the moral high ground on freedom of speech after this.