London 2012 an urban project too 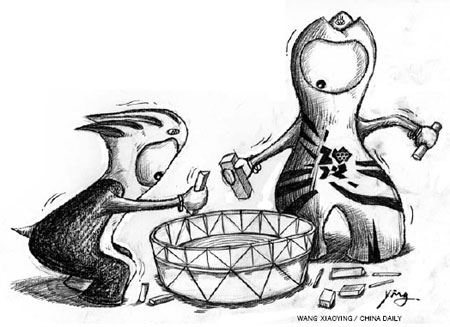 Just over two years ago I had the honor of representing London at the Beijing 2008 Olympic and Paralympic Games, and I was bowled over by the stunning show Beijing put on for the watching world.

The sport was absolutely fantastic, the Games themselves were superbly organized, the closing ceremony was breathtaking and the Bird's Nest (National Stadium) was awesome. It seems unbelievable that in less than two years, London will be in the global spotlight as the world's greatest athletes compete at the world's greatest sporting event in London.

When the people of Beijing look back at that incredible period, they can see how their Games delivered major improvements to the transport network along with new public and community facilities springing up across the city, while at the same time bringing Beijing and China to the attention of millions of people worldwide.

I am also determined to see that the London 2012 Games leave a lasting legacy for our city - and we already have much to be proud of. Our plans are on schedule and on budget and in some cases even under budget. Earlier this week, I witnessed the huge floodlights in London's Olympic Stadium being switched on for the first time.

What's more, I recently opened the state-of-the-art Energy Centre at the Olympic Park, which will not only help reduce carbon emissions of the Park, but also raise new standards of sustainability in the United Kingdom. Within the Park, construction has begun on the ArcelorMittal Orbit - London's newest major landmark. The sculpture was designed by award winning artist Anish Kapoor in collaboration with one of the world's leading structural designers, Cecil Balmond, and will become a major iconic attraction to rival to the Eiffel Tower and the Statue of Liberty.

Meanwhile, the East London Tech City will place London at the forefront of the high-tech revolution and bequeath to London a vibrant new business quarter in the east of our city - the list goes on, and all of these developments go to show just how wide-ranging the legacy for London will be following the Games.

The sporting legacy itself is already visible. Our stadium is fast nearing completion, as are our other venues such as the Aquatics Centre and the Velodrome. In fact, our first 2012 venue, the white water center in the county of Hertfordshire, was opened last week. The majority of the venues and facilities will be ready to hand over to our organizing committee in 2011, a year ahead of the London Games.

If the International Olympic Committee wanted to bring the Games forward a year, we would be ready for it. We must not lose sight of our promise to deliver a genuine grassroots sporting legacy for all Londoners, and our Olympic and Paralympic Games have the potential to unlock real change in the way youngsters engage in sport.

An amazing amount of hard work has already taken place over the past few years and this huge effort will continue long after the summer of 2012 to ensure we deliver that legacy for London and future generations of Londoners.

Our plans go further than simply delivering thousands of new homes, jobs and creating new communities on our Olympic Park. We are looking beyond its boundaries to the wider opportunities the 2012 Games can deliver for east London, an area which includes many of the UK's most deprived neighborhoods and for which the Games represent an unmissable opportunity.

Our aim is to transform our capital by creating a brand new metropolitan district to the east of the capital, and ensuring that the communities in east London enjoy the same opportunities and quality of life as the rest of their fellow Londoners. As well as great sporting facilities post 2012, London will also have a huge new state-of-the-art business asset once our media center for the Games has been decommissioned. I want to see this become the seed of a growing center of innovation for the 21st century.

However, we also have major plans for east London's historic Royal Docks, just down the road from the Olympic Park. Once the beating heart of Britain's overseas trade during the 19th and 20th centuries, we want to return them to their former glory as a thriving, vibrant place to live, work and visit. With its miles of waterfront and open spaces, this special part of London provides a unique opportunity for investors to benefit from London's economy, which is continuously growing and diversifying all the time. The Royal Docks are already home to the colossal ExCeL Exhibition Centre and the new International Convention Centre, London City Airport and the University of East London with 18,000 students. Close by is the 02, the world's most popular entertainment venue.

The London Games are acting as a catalyst for this long-term regeneration project, which is being strongly driven by the massive construction work taking place on our Olympic Park. The Canary Wharf business district, housing a large chunk of our financial and banking sector, is also growing at a great pace adding to the momentum. But I want to take this once in a lifetime opportunity to ensure that London takes full advantage of the new emerging business sectors and markets that are changing the global market in this new century.

That is why I want to create a new "Green Enterprise District", stretching across east London which aims to attract new investment and 6,000 jobs by 2014. When I launched this vision last spring, electronics giant Siemens showed its confidence in the emerging green economy by committing to invest 30 million ($46.7 million) in a new exhibition and conference center for sustainable technologies, which is expected to attract about 100,000 visitors a year.

All these fantastic facilities, from those in the Olympic Park to those near the waterfront of the River Thames, will be connected to an impressive transport infrastructure including the Docklands Light Railway, the Jubilee Line on the Underground and the country's motorway network. These excellent transport connections will be further boosted by the arrival of Crossrail in 2017, transporting visitors from Heathrow Airport to east London in about 45 minutes.

Since 2009, our vision for regenerating east London beyond the Games has been skillfully planned by the Olympic Park Legacy Company, jointly established by myself and the government. I have since agreed with the new UK coalition government that we will create a new "Mayoral Development Corporation", which will report solely to me as mayor and be responsible for the future of both the Olympic Park and the neighborhoods immediately around it, the success of which cannot be separated from that of the Park itself. This will give the mayor of London the powers to ensure we can deliver the huge ambitions I, and many others, share for transforming this part of east London.

The building of the London 2012 Games has been one of the largest construction projects Europe has seen in a decade and I believe that, if we achieve our goals, it will become one of the most important urban regeneration projects and investment opportunities in modern history.

The author is mayor of London.