I was shocked to hear that authorities in Shanghai have decided stray dogs will be "dealt with" after keeping them in rehabilitation centers for just 30 days. It is hard to believe that a civilized society can treat life with such coldness and lack of concern.

All lives deserve respect, even if they are homeless and uncared for dogs. Mercy is an integral part of our tradition as well as a universal virtue. As an ancient Chinese proverb goes, "the ruling heaven cares for all lives".

It is really cruel to put dogs to death just because they have no owners. The Shanghai draft regulation on pet animals betrays universal values and traditional virtues both.

By proposing such a draft, officials may be trying to solve the problem of stray animals. But their decision should be conscientious, instead of being focused on saving money and avoiding trouble. The draft is unacceptable and should be revised.

To solve the problem of stray animals, it is necessary for the authorities to find its root first. There are two kinds of stray animals: those that lose their way and cannot find their home and those that are abandoned by their owners.

Let alone dogs, even human beings (especially children) can lose their way in today's pedestrian-unfriendly cities, which essentially are a jungle of high-rise buildings. The dogs cannot be blamed for that.

The pseudo-lovers of dogs (they are not rare) are to be blamed for driving their pets away when they no longer need them or when they are sick. The innocent animals should not be punished for the wrongs committed by humans.

We should learn from some foreign countries how to treat such animals. Relevant departments should put them in rehabilitation centers and issue public notices to find their owners. The animals that are not claimed by their owners can be considered abandoned and put up for adoption.

In this Internet age, it is not difficult to post a notice online. Many non-governmental organizations have been doing a good job of finding stray animals a home. So the local government cannot wash its hands of the problem and put the animals to death.

Considering the size and population of today's cities, a one-month buffer period is too short a time to find the owners of stray dogs and cats. The period should be at least five to six months. The highly developed Shanghai is an economic powerhouse and has enough funds to bear this trivial cost.

Of course, the local government should cull the dogs suffering from incurable infectious disease like rabies and thus pose a threat to humans and other animals. Putting them to death without making enough efforts to find them a home or cure their disease is tantamount to massacre.

China has performed an economic miracle and is today an emerging power. But it lags behind many other countries in spirituality and moral education.

A society without respect for life is uncivilized. Indifference and cruelty to life are signs of moral decline. Let us treat animals with care and allow our conscience to guide our actions.

The author is an animal rights activist. This is an excerpt of her interview with China Daily's Zhang Zhouxiang.

Some people challenge the Shanghai draft regulation on keeping dogs, saying it means stray dogs can only stay in animal shelters for 30 days, after which those not claimed or adopted would be executed.

But Ding Wei, a local official, has said such people have misread the draft. The draft only says that stray dogs would be "dealt with" after being kept in the shelters for 30 days, not necessarily executed. Only dogs with infectious diseases would be executed. Policymakers are still considering how the others would be "dealt with", because the law is blank on that.

Rehabilitation centers are temporary shelters for homeless dogs, that offers animal lovers the choice to adopt the dogs. But instead of doing that they are protesting against the draft. They should not force the government to shoulder the burden of keeping and feeding thousands of dogs.

Can all the problems be solved through adoption? No. A recent program on China Central Television said a woman had so many cats in her house that she was forced to stay in a public dormitory.

That created all sorts of problems for neighbors, who complained against the foul smell emanating from the house in summer and the cats' calls and cries at night. But the woman did not feel sorry for what she had done. On the contrary, she said her neighbors complained against her because they hated animals.

People do have the right to keep pets but only if they or their pets do not disturb other people. No person has the right to violate other people's right to live in peace, and pet owners should know that all rights come with obligation. Protecting private rights is important, but so is protecting public rights.

According to another media report, a woman in Shenzhen of Guangdong province has more than 10 pet dogs. These dogs have bitten more than 20 people in the neighborhood. Once, three of her dogs attacked a 3-year-old boy. The woman may be a great animal lover, but her dogs have become a threat to her neighbors.

Many dog owners are found wanting when it comes to social responsibility. They don't care when their pets excrete on pavements or other public places when they are supposed to clean up the mess. This shows that even a dog that has owner can be a big nuisance.

More than 100,000 cases of dog attacks have been reported in Shanghai each year, according to official data. In the first four months of 2008 alone, more than 60,000 people received rabies vaccines. Dogs may mean happiness to some, but they can be trouble for others.

Love for animals is a good thing, but it should not be taken to extremes. A person who loves dogs or cats cannot and should not expect others to do the same.

Putting animals with infectious diseases to death is a service to humankind. But radical animal rights activists oppose even that. How can such activists eat pork, beef, mutton, chicken and fish and be passionate about protecting dogs and cats at the same time? Should they not stop wearing leather shoes and using other products made of leather as well?

To love dogs and cats does not mean being hypocritical about animal rights.

The author is a freelance writer based in Beijing.

Not every dog can have its day

New Zealand, a country spread over about 270,000 square kilometers and with a population of 4.3 million, has at least 43 million sheep, that is, 10 per person. Paris is infamous for the dog excreta on sidewalks that force people to keep their eyes down while walking. But complaints about these domestic animals being a nuisance to the public are rare.

Deng Zixin, a deputy to the Shanghai city people's congress, told the Xinhua News Agency that the dog ownership problem "was getting out of hand". If dog ownership is not better managed, dogs could become a bigger nuisance for people with their barking, biting and littering.

Perhaps that is why Shanghai is set to follow Chengdu and Guangzhou in allowing a household to own only one dog from next year.

More than 55,000 people die of rabies across the world every year, according to the World Health Organization. And China is second only to India on the list of countries with the highest number of rabies deaths.

Though rabies can be prevented if people have their dogs vaccinated, a 2009 BioMed Central report said that 60 percent of the Chinese cities its survey covered had a vaccination rate of less than 70 percent.

If, as the draft regulation on keeping dogs recommends, the authorities allow one household to keep only one dog, many people are likely to continue having several dogs but registering just one of them. The draft suggests that the number of dogs a family can have will depend on the size of its house, its rural or urban area nature and the open space in its compound.

Initially, there was confusion whether the authorities would catch stray dogs and put them in rehabilitation centers or whether they would put the dogs to death after waiting for 30 days for their owners to claim them. But later, Ding Wei, a local official, clarified that only dogs infected with diseases like rabies would be culled and that the draft was blank on how the rest would be treated.

There are legal and humane ways to keep the number of dogs under control. Sterilization is easy and safe way to do that. It is also cost-saving. But it is important that pet owners are made to realize its advantages.

Dogs and cats loiter in streets because of irresponsible people who drive them away for one reason or the other. Pet ownership should come with responsibility. People should teach their pets not to go about sniffing or licking or attacking people in the streets.

The draft regulation should not be opposed. Laws curtail the freedom of certain groups for the greater benefit of society. There is nothing inhumane in the draft. On the contrary, it may create greater awareness among pet owners and put to practical use the 2010 World Expo's slogan of "Better City, Better Life" in Shanghai.

The author is a Canadian scholar now based in Beijing. 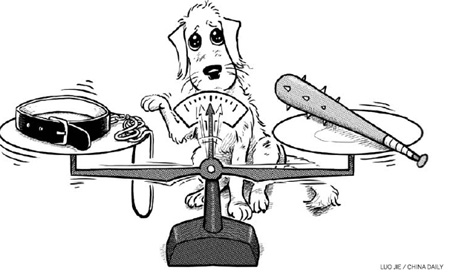