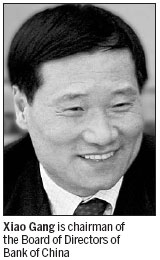 On Christmas day, China's central bank raised interest rates for the second time in 2010 to check rising consumer prices and the heated real estate market. It would not be surprising to see the central bank lift the rates again in the near future.

The move has left me wondering whether allowing interest rates to play their due role in the economy through liberalization, as opposed to raising them artificially time and again, would be a better way of curbing inflation.

While there has been remarkable progress in the interest rate reform since the mid-1990s, China still has restrictive controls over deposit rates and sets a 10 percent floor on benchmark lending rates. It is not hard to see the challenges our economy now faces because of these controls. The rise of the consumer price index by 5.1 percent in November has left negative real rates for deposits, that is, deposit rates are lower than inflation. This indicates that households' purchasing power is being eroded by the rise in consumer prices.

For many years, both experience and research have shown that real interest rates have a close correlation with liquidity levels, consumer behavior and even real estate investments. Deposits tend to be more actively used to buy real estate and other assets when real interest rates are negative, enlarging asset bubbles and, in turn, fanning inflationary fears.

In the intensifying competition to attract deposits with relatively low rates, some domestic commercial banks have even engaged in irregularities such as handing out gifts, or even cash and gold, as rewards to their customers. This kind of behavior shows that the repressed interest rates for deposits do not reflect the real level of market rates. Thus it is reasonable to believe that the interest rates on deposits will automatically rise once they are allowed to fluctuate within a certain range.

Furthermore, liberalization of interest rates is good for the health of our banking industry. It will force banks to become more creative by intensifying competition, narrowing the net interest margin and shrinking the room for profits. That would immediately create incentives for banks to give more loans to small- and medium-sized enterprises, a sector in which banks enjoy higher lending rates, to maintain the financial institutions' profitability. Also, it could help enable the banking industry to change its business model from one that overly relies on income from interests to one that focuses on providing comprehensive and diversified services to customers.

China's banking system will become stronger only when the protection provided by the government's interest rates controls is lifted. If that happens, the pricing capability of a bank will be at the center of its competitiveness. Now, commercial banks simply decide their lending rates according to the regulated benchmark, coupled with clients' ratings and guarantees, but they do not fully incorporate the risks into their pricing.

Once interest rates are liberalized, banks have to measure the risk compensation level by calculating the client's probability of default with their own models before deciding on the lending rates. Things then will be different for every bank and the ones that are really good at risk pricing will stand out and thrive.

Liberalization of interest rates can be useful for deepening China's capital markets and improving the monetary policy transmission mechanism. The rapidly growing domestic stock market, debt market and inter-bank market have not only formed a favorable environment for interest rate reform, but are also calling for further interest rate liberalization.

From a long-term perspective, interest rates are, by nature, the "price" of funds and an economic lever, and therefore must be decided basically by market forces. Properly stepping up efforts to liberalize interest rates has become an indispensable part of the development of socialist market economy. It could better shape China's economic structure, correctly reflect money supply and demand, and improve the efficiency of capital allocation and utilization, as well as improve the efficiency of the use of economic and social resources.

Most countries have imposed controls on interest rates for a certain period in their histories, and such controls have played an important part in economic growth and financial stability. But many countries, both developed and developing, have sooner or later embarked on the path of interest rate liberalization after their economies reached a point where marketization needed to be deepened to improve the efficiency of capital use.

Apart from many advantages of liberalizing interest rates, evidence from around the world shows the significant risks to the economy and financial system that this policy can bring. In some countries' cases, interest rate liberalization revealed their banking industries' vulnerabilities and even made some banks go bankrupt. As a result, those countries had to stop their reform, and resume controls on interest rates.

For China, the time has come to accelerate interest rates reform. China's economy has successfully weathered the storm of the global financial crisis and has become an important growth engine for the world economy. Well-combined with market forces and the government's role, macroeconomic management capabilities in China have been strong enough to meet challenges.

Thanks to years of reform and restructuring China's banking sector, less affected by the global financial crisis, has continually improved its ability to grow, laying a solid foundation for future development.

Many banks have also begun to revamp their risk management mechanisms and develop their "universal" banking businesses to be prepared for financial liberalization and disintermediation.

So far no ceilings have been imposed on lending rates, and almost all rates in the inter-bank market have been liberalized. What we should do next is to gradually let medium- and long-term, large-sum deposit rates fluctuate within certain ranges. It is necessary to raise the low floor for lending rates, too.

As Zhou Xiaochuan, the central bank governor, recently said at a forum, China should let excellent banks enjoy the freedom to be pioneers in further liberalizing interest rates.

There are a lot of things to be done for the reform, and as in other countries, it will take time to realize the goal.

For now, the most important thing is to continue to move in the right direction.