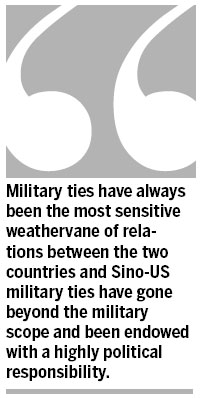 US Defense Secretary Robert Gates is scheduled to visit China starting on Sunday at the invitation of State Councilor and Defense Minister Liang Guanglie.

The visit symbolizes the normalization of the interrupted high-level military exchanges, and will help promote good interaction and broader relations between China and the United States. It will also pave the way for President Hu Jintao's visit to the US due to start on Jan 19.

Military ties have always been the most sensitive weathervane of relations between the two countries and Sino-US military ties have gone beyond the military scope and been endowed with a highly political responsibility.

In the past decades since normalization of diplomatic ties between China and the US, military needs, for a long time, played an important role in driving the development of bilateral ties, in addition to their unified front against the perceived military threat from the then Soviet Union. However, the disappearance of the Soviet threat quickly put military ties between Beijing and Washington in a particularly vulnerable position and ever since bilateral military ties have been affected from time to time by their political relations.

Currently, Sino-US relations remain generally stable and bilateral cooperation remains smooth on a range of important global and regional issues, as common interests override disagreements on some issues. However, security and military exchanges have long lagged behind exchanges in other fields.

Lack of mutual trust has proven to be the biggest obstacle to good Sino-US military ties. Despite their efforts to avoid direct conflicts, the military forces of both countries seem to look upon the other as the largest potential threat. The risk of military conflicts between China and the US over the Taiwan question has subsided in recent years, but the root cause for such Sino-US clashes has not been completely eradicated.

The Anti-Secession Law commits the Chinese government to take all available measures, including military ones, to oppose and check Taiwan's split from China.

At the same time, the US' Taiwan Relations Act allows the US to provide "defense services in such quantity" it deems necessary to Taiwan. Such legislation makes a head-on military confrontation between China and the US over the Taiwan question a real possibility.

China's development is viewed by the US as a potential challenge to its dominant role in the Asia-Pacific region and many Chinese view Washington's shift of military focus from the Atlantic to the Pacific and strengthening of military alliances with Asian allies as Washington's strategic attempts to contain China.

Under these circumstances, military ties between the two countries have become a "zero-sum" game in the absence of mutual political trust.

To create a harmonious external environment for its peaceful development, the Chinese government and its military have voiced their intention to develop normal military ties with the US.

To promote good military interactions, China and the US should discard their rivalry, set up a more open communication mechanism and try to improve their military transparency.

It is China's consistent stance that it adheres to a defensive military strategy. The US should realize that any forms of blockades, sanctions and containment will only push bilateral military ties in the wrong direction. China has no intention of challenging the US' core interests or pursuing a regional or global hegemony even after it becomes more powerful.

China's economic development and its military buildup will unavoidably expand the scope of its military activities, increasing the possibility of accidental military conflicts with the US. Under these circumstances, the two countries should strictly abide by international navigation and flying rules and try to prevent any provocative actions.

The establishment of an open communication mechanism will enhance mutual trust and help avoid military accidents. To help their established dialogue and consultation channels at various levels play a better role in this regard, China and the US should respect each other's core interests.

For the US' part, it should refrain from arms sales to Taiwan to prevent the most sensitive issue from negatively affecting its ties with China and sabotaging the political foundation of bilateral strategic military communication.

The two countries should also try to make their strategic intentions crystal clear to one another, so that they pursue cooperation instead of confrontation.

China has made efforts to improve its military transparency over recent years. The country regularly publishes its national defense white paper and has opened its Ministry of Defense website to the outside. It has also granted foreign military personnel access to many of its new military facilities. The greater transparency and openness of China's military should help reduce outside misgivings.

The author is a rear admiral and former head of strategic studies at the People's Liberation Army's National Defense University.