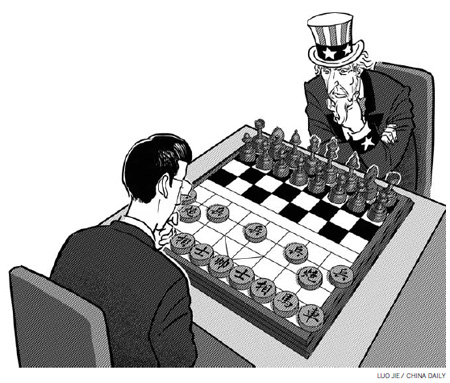 Beijing and Washington both are gearing up for President Hu Jintao's meeting with United States President Barack Obama later this month. The high-profile meeting will mark President Hu's first state visit to the US since April 2006 - and the first since the Obama administration took office.

Chinese officials have described the upcoming meeting as "very important" and said the discussions would "enhance dialogue, strengthen mutual confidence and expand and develop cooperation". US officials have voiced hopes for "tangible results" from the negotiations.

But most analysts agree that ties between the two governments are strained. One does not have to look far to find evidence in support of their argument. A prominent US foreign policy analyst once said: "Where you stand depends on where you sit." This observation applies to the troubles that now plague Sino-American relations.

The US complains about China's "predatory trade policies", "neo-mercantilism" and "undervalued currency". From Washington's perspective, Beijing's "unfair" economic policies hurt the American economy and contribute to its high unemployment.

But others see things differently. Chinese decision-makers say that many of America's economic woes can be traced to Washington's irresponsible fiscal policies. Not surprisingly, they look at American "advice" with skepticism. For example, officials warn that a dramatic revaluation of the Chinese currency will destabilize China and be "a disaster for the world" without helping the US economy in any way.

Tensions on the Korean Peninsula are certain to be at the top of the security agenda when Hu meets with Obama. Washington is outraged by recent actions of the Democratic People's Republic of Korea (DPRK), including the shelling of Yeonpyeong island on Nov 23, renewed efforts to pursue a uranium enrichment program and the suspected sinking of a Republic of Korea's warship in March.

The Obama administration has demanded that China "do more to pressure" the DPRK. But Beijing has voiced a preference for the resumption of multilateral negotiations and dialogue, rather than harsh rhetoric, threats and high-profile military exercises.

Some analysts speculate that China's policies are based on concerns that a strong response to the DPRK's behavior could provoke Pyongyang and holds the potential to destabilize the entire region. Perhaps if the US had a country like the DPRK as a neighbor, it might see things differently.

Recent developments in the waters surrounding China are yet another source of friction. For hundreds of years, successive Chinese governments have claimed the South China Sea as part of the nation's territory. For example, in the 1930s and 1940s, Chiang Kai-shek's government published maps with a U-shaped dotted line showing that most of the area belonged to China.

But other countries also claim parts of the territory. Washington had embraced a neutral policy toward the issue until US Secretary of State Hillary Clinton announced in Hanoi, Vietnam, on July 23 that the US has a "national interest" in the South China Sea and offered various multilateral remedies to settle competing claims. The abrupt turnaround in US policy irritated China, particularly as it came after one high-ranking Chinese official was reported to have described the area as one of "core national interests".

The spat over the Diaoyu Islands could also find its way into conversations between Hu and Obama. These islands were grabbed by Japan during the First Sino-Japanese War (1895). Taipei and Beijing both say the islands belong to China. In fact, Ma Ying-jeou, Taiwan leader, is the author of a definitive study on the islands' international status. But the US is not calling for an investigation of claims or a "multilateral remedy" to the dispute. Rather, Clinton warned recently that the islands fall within the scope of the US-Japan security treaty. Washington seems to think that its position shows that it is standing with an old friend and key ally. Beijing, however, sees more than a tad of hypocrisy in Washington's policy toward the dispute.

To be sure, the Taiwan question represents a "good news story" in Sino-American relations. Relations between the Chinese mainland and Taiwan are at their best since 1949. Nevertheless, the US continues to sell advanced arms to Taiwan and argues that such sales promote stability and are required by US law. But from China's perspective, the sales violate the terms of the 1982 Sino-US Joint Communiqu and embolden "Taiwan separatists", while doing nothing to promote the peaceful development of cross-Straits ties.

In sum, relations between Washington and Beijing have chilled because of different perceptions and policies toward a variety of economic, political and security concerns. A more complete discussion would also include squabbles over climate change, human rights, defense expenditures, military deployments and a host of other issues. As US Attorney General Eric Holder observed, "given the nature of the Chinese-American relationship and the importance of that relationship, there are going to be areas upon which we will simply not agree". Holder was quick to add, however, that this "does not mean that the relationship should not go forward, should not be seen as a priority for both our nations".

After all, cooperation between the two governments is essential if the international community hopes to cope with a wide range of pressing global problems, including terrorism, the proliferation of weapons of mass destruction, environmental degradation, health issues, dwindling energy supplies and the continuing global economic crisis, to name just a few.

Given the stakes involved, it is likely that President Hu and President Obama will work hard during their meetings to manage disagreements and keep them from escalating. As a first step, however, both leaders could follow the advice of Henry Ford, founder of the Ford Motor Company, who advised that "if there is any one secret of success, it lies in the ability to get the other person's point of view and see things from his angle as well as your own".

The author is the director of the Graduate Program in Global Studies at Missouri State University and the author of numerous articles and books on Sino-American relations.