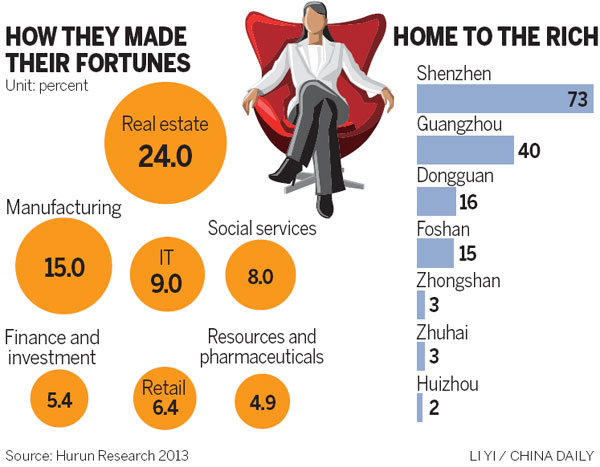 Despite the central government's tightening policies in the property market, the real estate sector still generates the largest number of billionaires in southern China, according to the Hurun 2013 Pearl River Delta Region Rich List.

This is the first time that the Hurun Report, a Shanghai-based magazine that covers wealthy Chinese people, releases a list for the region.

About 24 percent of the billionaires in the Pearl River region, which includes Shenzhen, Guangzhou, Dongguan, Foshan, Zhongshan, Zhuhai and Huizhou, come from the property industry, while 15 percent are in the manufacturing industry. The third-largest group of billionaires in the region is in the information technology industry.

Among the top 1,000 Chinese wealthy people shortlisted by the Hurun Report, 21 percent of them are from the manufacturing industry, the largest group of all. Next comes real estate, with 20 percent of the rich coming from the sector.

Globally, property tycoons also hold most of the world's wealth, the report said, followed by investors in the telecommunications, media and technology sector.

Shenzhen is home to the largest number of rich people in the region, with 73 billionaires. Guangzhou, which is home to 40 billionaires, dislodged Dongguan from the second position.

US envoy to visit DPRK to secure prisoner's release

US 'must consider impact' of winding down QE

China gearing up for plenary session