"Mayor Bloomberg Destroys the Livelihood of Food Delivery Workers," some of the neatly handwritten signs read. Others called on New York Mayor-elect Bill de Blasio to repeal a ban on electric bicycles (e-bikes).

"Today [we] have come together with many workers to fight for our rights," said Hua Li, a representative of the Chinese Staff and Workers' Association (CSWA), at a protest Wednesday morning outside the Grand Street subway stop in Manhattan's Chinatown.

On Nov 11, New York City began enforcing new laws that prohibit workers and businesses from using e-bikes on city streets. Violating the laws could result in fines of up to $1,000 - equivalent to the average cost of an e-bike - or confiscation of the bike.

The city says the laws are aimed at the danger that the increased use of e-bikes poses to pedestrians. An e-bike can go up to 20 miles per hour and weigh 50 pounds.

Abiding the laws would affect about 80 percent of Chinese delivery workers who depend on the bikes because of their speed and being less physically demanding, according to a CSWA statement.

"Delivery workers have a very hard time doing their work," protester Xingduan Zhang said. "We have to climb stairs up and down all the time. Electric bikes help us reduce the physical suffering while we're working."

An e-bike looks like a regular bicycle, but has an attached motor. The bike comes in different varieties, including "pedelecs" that assist a rider's pedaling power or more powerful ones that are closer in function to mopeds.

"Many bosses only pay $3 or $4 an hour. That's why we have to run a lot doing the deliveries to be able to get tips and survive," said Carlos Rodriguez Herrera, who is a pizza deliveryman and a member of the National Mobilization Against Sweatshops. "It's very tiring to ride on regular bikes, especially for older workers."

"These laws only give policemen more excuses to come target and harass delivery workers," Li said.

Laws passed in 2004 allowed police to issue a violation when they saw an e-bike in use, but the new regulations also make businesses liable for possession. Former laws exempted e-bikers riding at or below 15 miles per hour. However, due to the difficulty of discerning exact biker speeds, the new laws give officers the power to pull over any e-biker.

Protester Sean Basinski, director of the Street Vendor Project at the Urban Justice Center, said it is easy for politicians to pass laws against vendors and delivery workers, and for police to give tickets and arrest workers.

Li said that no outreach to the Chinese community occurred to alert workers and businesses about the new laws. Due to delivery workers' long and demanding work hours, she said they don't have time to participate in town hall meetings where the laws are discussed.

These workers must live fast-paced lives to make ends meet, Li said, adding that they also put their safety at risk.

"We want to work!" one deliveryman shouted. 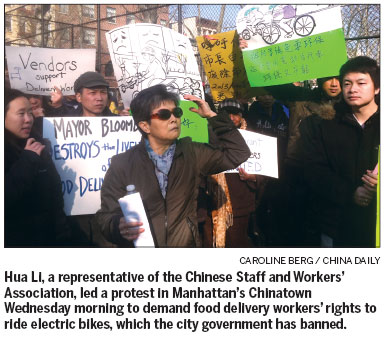