Laura Ingalls Wilder penned one of America's most beloved children's series of the 20th century, but her forthcoming autobiography will show devoted Little House on the Prairie fans a more realistic, grittier view of frontier living.

Pioneer Girl: The Annotated Auto-biography - Wilder's unedited draft that was written for an adult audience and eventually served as the foundation for the popular series - is slated to be released by the South Dakota State Historical Society Press in the United States this fall.

The not-safe-for-children tales include stark scenes of domestic abuse, love triangles and a man who set himself on fire while drunk.

Wilder and her daughter Rose Wilder Lane, herself a well-known author, tried and failed to get an edited version of the autobiography published throughout the early 1930s. The original rough draft has been preserved at the Laura Ingalls Wilder Historic Home and Museum in Mansfield, Missouri, for decades but hadn't been published. 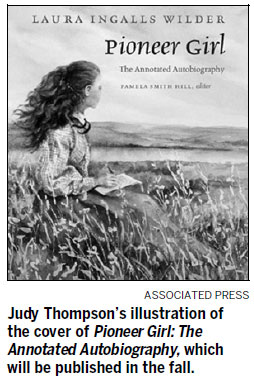 The children's series never presented a romanticized version of life on the prairie - in Little House in the Big Woods, Laura and her sister Mary gleefully help dissect the family pig before bouncing its inflated bladder back and forth in the yard.

But the series also left out or fictionalized scenes that publishers deemed unsuitable for children, including much of the time the family spent in BurrOak, Iowa, and Walnut Grove, Minnesota, according to Pamela Smith Hill, a Wilder biographer and the lead editor on the autobiography.

"So you can read Pioneer Girl as nonfiction rather than fiction and get a better feeling of how the historical Ingalls family really lived, what their relationships were and how they experienced the American West," she says.

Wilder details a scene from her childhood in Burr Oak, in which a neighbor of the Ingalls' pours kerosene through out his bedroom, sets it on fire and proceeds to drunkenly drag his wife around by her hair before Wilder's father - Pa in the children's books-intervenes.

Scenes like that make Wilder's memoir sound like it's filled with scandal and mature themes, "which isn't exactly true either", according to Amy Lauters, an associate professor of mass media at Minnesota State University-Mankato.

"It was full of the everyday sort of things that we don't care to think about when we think about history," says Lauters, who has read the original manuscript. "And it's certainly not the fantasized version we saw on Little House on the Prairie, the television show."