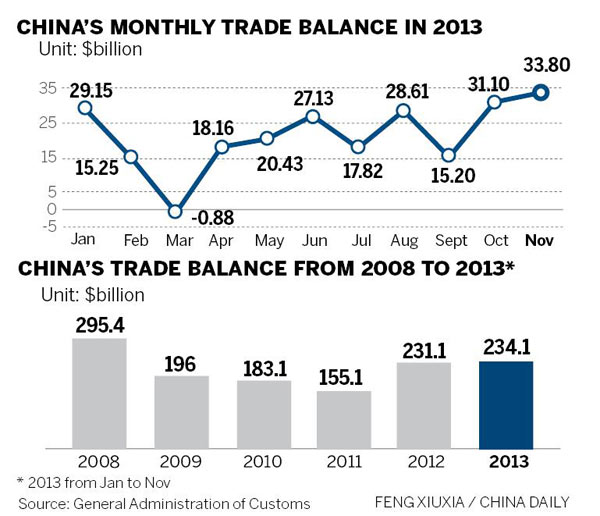 China's acceleration of exports and slowdown of imports in November left the country with its largest trade surplus in more than four years.

The improvement of overseas demand increased China's chances of securing an 8 percent trade growth target this year. It also gave the new leadership more room to advance reforms and ensure that markets play a decisive role in the economy.

But experts cautioned that the inflow of "hot money" has been disguised as trade payments.

Overall trade in the first 11 months of this year rose 7.7 percent year-on-year to $3.77 trillion, slightly lower than the government's 8 percent growth target set earlier this year.

The trade surplus in November, $33.8 billion, was the highest since 2009, when the government launched a large-scale stimulus package.

The country's overall trade gains in the period from January to November this year reached $234.15 billion, more than the total value for last year.

"November's export growth is partially owing to the recovery in developed economies and the seasonal demand surge through festivals such as Christmas," said Wang Jun, an expert at the China Center for International Economic Exchanges.

"But it's very likely that speculative funds, or hot money, flowed into China chasing the renminbi appreciation."

According to Chen Hufei, a researcher at the Shanghai-based Bank of Communications Ltd, "The export surge in November was more possibly driven by the inflow of hot money speculating on the difference in interest rates at home and abroad as well as the continuous appreciation of the renminbi."

On Sunday, the State Administration of Foreign Exchange and China's foreign exchange regulator said that "it will crack down on fake trade activities for interest arbitrage" and asked banks to report suspicious trade activities.

In the first half of this year, foreign trade companies were caught over-invoicing and export growth in April was as high as 14.7 percent from a year earlier. SAFE then investigated a crackdown on the practice of inflating trade growth.

"November's remarkable trade surplus will increase expectations for the appreciation of the renminbi. It will also weaken China's exports next year when the US tapers off its monetary stimulus and capital flows out of China," Wang said.

He added that China's import growth in November was "in line with the country's economic performance", while GDP growth in the last three months of this year "will be slightly better" than the three months ending September.

"The inherent driving force for China's economic growth is becoming dynamic and imports will maintain steady growth in the future," Chen said.

China's economic growth rebounded to 7.8 percent in the third quarter of this year after slowing to a two-decade low in the previous quarter. Earlier this month, official figures showed that China's manufacturing growth in November maintained a strong pace from the previous month to stay at a 19-month high.

GDP growth could hit 7.8% next year