Shanghai Husi Food Co was suspected of using expired meat and was shut down by local regulators in China. The long-time McDonald's meat supplier was also cut by other fast food chains it supplied.

Due to the vast size of the fast-food market in China, which poses an obstacle to consistent regulating, foreign companies are going to need to invest a lot more resources in their supply lines, an expert said.

"We've got a situation now where a lot of multinationals and domestic firms as well are really facing a credibility issue in the China market," Ben Cavender, a senior analyst at China Market Research Group in Shanghai, told the Wall Street Journal.

In addition to Shanghai Husi Food, law enforcement officials had inspected 581 food producing and processing companies in the city.

According to a Pew Research study last year, of the more than 3,200 Chinese people surveyed, 38 percent said food safety was a very big problem, up from 12 percent in 2008.

"Consumers are very worried that they're not being given safe products," said Cavender.

"What it's going to force these companies to do is re-examine their supply chain," he said. 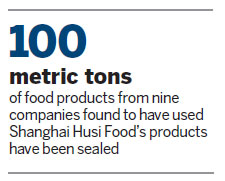 According to the Wall Street Journal, Wal-Mart Stores Inc tests at least 600 products daily in China to catch flaws before food is sent out to its stores.

Chicken processor Tyson Foods Inc has spent hundreds of millions of dollars in recent years building its own farms in China in order to control the safety of its supply chain from farm to grocery store, according to the Wall Street Journal.

"Companies will have to be a lot more aggressive in terms of how they source their product, and how they look at it as well," Cavender said.

China is challenging because it is a huge market that is rapidly changing, more supply is needed, and companies are not as mature, he added.

Zhang Yongjian, director of the Research Center for Development and Regulation of the Food and Drug Industry, said lack of supervising and monitoring capacity, resources and professionals has resulted in the reoccurrence of food safety scandals in the supply chains.

Closely held OSI, which had $6.1 billion in sales last year and ranks among the largest US meat processors, has been active in China since 1991 and currently operates in eight cities there, supplying meat as well as produce. OSI began supplying the Chinese operations of McDonald's in 1992 and those of Yum, parent company of KFC and Pizza Hut, in 2008, according to the meat processor's website.

OSI told the Wall Street Journal that executives were "appalled" by reports and had launched an investigation into what the company believes is an "isolated event".

In the US and many other countries, manufacturers have the primary responsibility for product quality, whereas in China retailers selling food are forced to take stricter action because they are often held responsible for what they sell.

McDonald's analysts at Bank of America Merrill Lynch, Morgan Stanley, and J.P. Morgan, among others were not available for comment.

McDonald's has pulled chicken nuggets supplied by Shanghai Husi and is waiting for new orders to arrive from a supplier in Thailand.

On Tuesday, McDonald's CEO Don Thompson said he feels "a bit deceived" by the audit it received for Shanghai Husi Food, according to a Reuters report.

In a written reply to China Daily, McDonald's China said it has "stringent" standards and procedures in its suppliers' management, including "systematic and third party audits.

The fast food chain, which has more than 2,000 outlets in China, is working with Chinese authorities to investigate, the company said.

On Monday OSI said it would take full responsibility and act accordingly.

Shanghai police said on Wednesday that they had detained five people, including the head of the company and its quality manager, in connection with a Shanghai food supplier accused of selling expired meat to restaurant chains.

About 100 metric tons of food products from nine companies found to have used the supplier's products have been sealed. Other companies involved include 7-Eleven, Burger King and Dicos.

The Shanghai Food and Drug Administration said it has taken 124 samples from the sealed products that it will test.

"The results will be released to the public when they come out," said Gu Zhenhua, deputy head of the Shanghai FDA. Supervision departments were inspecting fast food chain headquarters, central kitchens, distribution centers and stores, the Shanghai FDA said on Wednesday.

China set for 'increase' in US FDI

Chinese have a crush on Harvard?

US to issue antidumping decision on Chinese solar products