The art of the sleuth 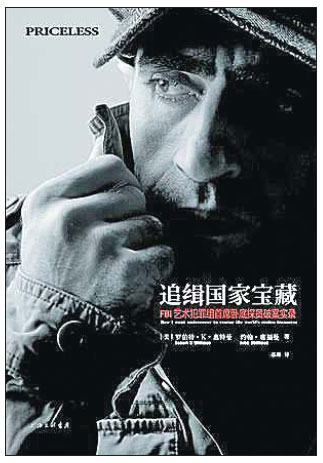 Former FBI investigator Robert King Wittman has written a book about his career tracking down the world's top art thieves. Mei Jia reports on a world of gangsters, intrigue and very valuable artworks.

The crystal ball, weighing 22.5 kg, was found in a young woman's bedroom in New Jersey in the United States, one year after it was stolen from a Philadelphia museum.

"The once-gorgeous exhibit was there on a dresser with a baseball cap on it," Wittman says. "She used the cap to shield it from the sunlight in case it acted as a conduit to start a fire."

During his 20 years with the US Federal Bureau of Investigation, Wittman went undercover to mingle with gangsters and the mafia, and rescued stolen artworks and antiques worth more than $300 million in total.

The list of recovered artworks includes the Auguste Rodin sculpture that inspired the Impressionist movement, Pearl Buck's manuscripts of the Pulitzer-winning The Good Earth, the original manuscript of United States Bill of Rights and Rembrandt Harmenszoon van Rijn's small 1630 Self-Portrait valued at $36 million.

Wittman recounts the stories behind these recoveries in his memoir, Priceless: How I Went Undercover to Rescue the World's Stolen Treasures. The book is written in a readable, entertaining style to alert the public to the importance of preserving cultural heritage.

"Once you lose it, basically, it's gone. Then you lose your history. And if you don't know where you came from, you'll repeat the mistakes," the former agent says.

The book was praised in The Washington Post, which wrote: "Almost every case he recounts has enough intrigue and suspense for a Hollywood screenplay."

The book has been released in Chinese by Hangzhou-based MatrixBook.

Wittman chronologically retells 15 stories from his career, "like a true crime story, weaving in a bit of history", he says.

Wittman wrote most of the book from memory, checking court records, media files and other sources to verify the details.

Born in 1955 in Tokyo to a Japanese mother and American father, Wittman's family moved to the US in 1958. Because of a lack of knowledge about Asian countries at that time, his mother was a victim of racial prejudice.

"I saw the situation, and realized the FBI was the group in the government that protected people's rights and protected them from racial intimidation," he says. "I thought it was something honorable and something I can do."

He applied to join the service at the age of 23 and was turned down for "having no experience".

After several years working at a Maryland agricultural magazine, where he received "good training on how to please people and be actual" as a reporter and salesman, he was finally accepted into the FBI at age 32.

He benefited from training in agent skills from veteran FBI men, learning tricks like which angle to stand when knocking on strangers' doors. In 2005 he created and led the FBI's Art Crime Team, and trained new agents to investigate art theft and art fraud.

Wittman also benefits from his Japanese and American background.

He says he grew up surrounded by Japanese and Chinese ceramics, and Japanese Ukiyo-e paints in the oriental antique shop his parents managed.

"I grew up buying and selling antiques," he says.

The Asian philosophy of patience is the key to successful undercover work.

"It's much like the Chinese way," he says. "In any type of investigation, it is better to just wait, relax and be harmonious, and let things develop over time."

Wittman retired in 2008. He says the biggest changes between then and now is the rise of the Chinese art market.

"It's fairly recently that China has become one of the top countries for art import and art sales, following the economic growth," he says, adding one phenomenon he observed from his career is that "criminals follow the financial market. When value goes up, the crimes go up".

He warned that there is a risk to art security and of art fraud in the country. He, his wife Donna and their children currently run a Philadelphia-based company on art recovery, collection management and security.

Wittman's favorite art to collect is Impressionist art, which was inspired by the Japanese Ukiyo-e paintings, along with Chinese scroll paintings.

"Chinese scroll paintings are very calming, good to look at and they're representative of what the painters have seen, including the calligraphy," he says.

"I collect only for taste, not for money," Wittman says, adding his personal art collection is not valuable.

Wittman says his collection has been influenced by the cases he has worked on, where he learned about specific types of art and fell in love with them.

Tokyo warned not to resort to 'empty talk'

No quick end in sight for Beijing smog