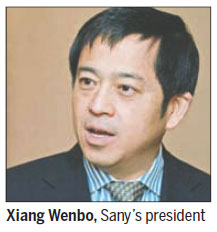 Executives of a Chinese conglomerate that has sued US President Barack Obama for blocking the purchase of four Oregon wind-power projects say they're still trying to ascertain the national-security reasons for his decision 10 months ago.

At the end of a week in which senior government officials discussed bilateral trade and security at the fifth US-China Strategic and Economic Dialogue in Washington, the two executives of Sany Heavy Industry Co gave a local audience their view of the case.

"I respect very much CFIUS' role in guarding US national security, but up to this point I still can't figure out why our investment in the wind farm would cause national-security concerns," Xiang Wenbo, Sany's president, said during a panel discussion on Friday organized by the World Affairs Council of Washington. "How should we respond?"

A day earlier, a federal judge in the US capital was urged by Obama administration lawyers to throw out the company's lawsuit.

In July 2012, just months before installation of the turbines was to be completed, the Committee on Foreign Investment in the United States, or CFIUS, cited unspecified risks to US national security in ordering Ralls to halt construction and remove all equipment from the site. It later emerged that the US Navy had complained to CFIUS - an interagency committee led by the Treasury Department that reviews large or sensitive asset purchases by foreign entities - because the farms were too close to a naval weapons-testing facility.

In late September, Obama acted on CFIUS' recommendation and ordered Ralls to sell its stake in the wind farms, the first time in 22 years that a US president had blocked a business deal on national-security grounds.

Although Obama's move was unusual, even rarer was the lawsuit filed just days later by Ralls in the US District Court for the District of Columbia - the first legal challenge by a thwarted foreign buyer to the CFIUS process.

Xiang was joined on Friday's panel by Wu Jialiang, a senior vice-president of both Sany Group and subsidiary Sany Electric Co who is also one of two Chinese citizens who directly own Ralls (the other is Sany Group Chief Financial Officer Duan Dawei). Xiang and Wu outlined their arguments in the suit, which argues that the company was denied due process under the US Constitution because the CFIUS offered no evidence or explanation for the national-security risks it says the deal presented.

Earlier this year, US District Judge Amy Berman Jackson ruled that Ralls could proceed with the part of its suit demanding that Obama explain the reasoning in his Sept 28 executive order to force the wind farms' sale. On Thursday, the judge had a hearing on the administration's bid to get the remainder of Ralls' challenge dismissed.

The Justice Department, calling the suit a "stunning proposition", argued that Ralls wasn't entitled to due process because it never finalized the acquisition of Terna Energy USA Holding Corp because the Chinese-owned company didn't undergo a required CFIUS review.

Wu said he has been asked many times in China if it was really possible to sue the President of the United States and whether he could face harassment or detention for doing so.

"To America's great credit," Wu said, "the answer is, 'Yes, I can sue the President on behalf of my company. And, 'No'- I can come and go into the United States without trouble or being followed or punished for that act. Therefore, filing the lawsuit has been a great experience to the Chinese and other people around the world - as to how the rule of law can provide the freedom for one to protect one's rights against one's own government in the courtroom on an equal footing."

Ralls claims it lost more than $20 million from its investment in the Oregon wind projects. Like Sany Heavy Industries' subsidiary Sany America, the company operates out of Peachtree City, Georgia. Ralls is incorporated in Delaware.

A former CFIUS insider said during Friday's panel discussion that it was unusual for the committee to insist on divestiture by Ralls when it could have sought a less-restrictive way to assuage the Navy's concerns.

"It's not in the realm of normal," said Chris Simkins, a former Justice Department official who as the agency's representative on CFIUS was a lead negotiator in reviewing the 2005 acquisition by China's Lenovo Group of the PC division of International Business Machines Corp.

"We use this statistic that there's only been one or two such orders from the president in the last 30 years - that doesn't take into account the multitude of times where CFIUS has said, 'Hey, the piece of paper we send to the president's going to recommend an unwind,' and the parties do it voluntarily. Early divestment is a way to resolve a lot of this."

Simkins, who now works in the private sector and wasn't involved in Ralls' CFIUS review, said, "From an outside perspective, it felt to me like divestment here could have resolved the issue - simply turning the wind-farm site over to US investors. We don't have the benefit of seeing everything that CFIUS saw, so it's a little tough to second-guess them. And again, it could have nothing to do with the concrete [details], or the equipment; it could have things to do with the people who may be behind it - who knows? There are a variety of things, but clearly, divestment to US entities is a way to mitigate."

Mahjong gains popularity among Jews in US

International cotton contract in the works