Sources from China's Ministry of Culture confirmed that the country is about to allow foreign game console companies to sell products in China if they register in Shanghai's new free trade zone, but denied lifting a decade-long ban on the video game hardware market in the country anytime soon.

Two officials from the ministry confirmed the accuracy of a South China Morning Post report. The story quoted sources that if foreign companies agreed to register in the new free trade zone in Shanghai, they would be allowed to promote and sell their products on the Chinese mainland.

But before they start selling, foreign gaming companies have to seek approval for specific products from related regulators because the Chinese government wants to make sure the content is not too violent or politically sensitive, according to the newspaper. (Photo 1)

Lenovo is the world's largest personal computer maker, in terms of shipment, according to IDC and Gartner.

The Chinese PC maker grabbed 16.7 percent of the worldwide market share by the end of June, passing Hewlett-Packard, which controls 16.4 percent.

However, regional results for Lenovo are mixed. Its business in the Americas, Europe and the Middle East saw steady growth, while Asia-Pacific business declined, according to IDC. (Photo 2)

Intellectual property lawsuits in China involving overseas companies increased in the first five months of the year amid global competition and trade protectionism.

From January to May, judges nationwide announced verdicts in 24,544 intellectual property rights cases, up by 36.6 percent year-on-year, according to the Supreme People's Court.

About 2 percent of those cases, or 504 lawsuits, involved overseas litigants. Last year, 1.7 percent of 83,850 such lawsuits nationwide were foreign-related, according to the top court.

Most of the lawsuits that involve overseas companies are related to infringement of trademarks, patents or copyrights, said Kong Xiangjun, president of of the top court's intellectual property tribunal.

The foreign parties involved are mainly from the United States, major European countries such as Britain, France and Germany, and Japan, he said.

Thirty-one students and teachers who were on board the Asiana Airlines flight that crashed in San Francisco returned to China.

The group arrived on Sunday at Hangzhou Railway Station in Zhejiang's provincial capital and then boarded a bus for the journey to Jiangshan Middle School, where parents and families awaited their return.

A key shareholder in Smithfield Foods Inc wants to break up the US pork giant and sell it in pieces rather than allow it to be sold intact to China's Shuanghui International Holdings Ltd, according to a regulatory filing.

Starboard Value LP, a 5.7 percent shareholder in Smithfield, said it hired New York-based Moelis & Co and Business Development Asia LLC to help get a better offer for Smithfield shareholders than the $4.7 billion deal which would be the largest Chinese takeover of a US company if completed.

In the filing, Starboard, a New York-based hedge fund, reiterated its belief that Virginia-based Smithfield, the world's largest hog farmer and pork processor, would be worth more if it were broken into three parts - US pork production, hog farming and international sales of fresh and packaged meats - and then sold.

Smithfield agreed in May to be acquired by Shuanghui, the main shareholder in China's largest meat-processing enterprise, for $34 a share, or $4.7 billion. The agreement also includes $2.38 billion in assumed debt.

The proposed deal is under review by the Committee on Foreign Investment in the United States (CFIUS), an interagency panel that investigates foreign investments in connection with national security issues. The proposed deal is seen as helping China - the world's largest consumer of pork - meet demand for the meat.

China's economy grew by 7.6 percent year-on-year in the first half, a marked slowdown in comparison with near double-digit growth recorded two years ago.

The government's yearly GDP growth target for 2013, set earlier this year, is 7.5 percent.

Sheng Laiyun, spokesman for the National Bureau of Statistics, said that despite the slowdown, China's growth is still higher than other major economies. China increased its holdings of US Treasury bonds by 2 percent in May to $1.32 trillion, with the recovering US economy and the continuing European sovereign debt crisis contributing to the increased purchase.

China, the biggest creditor to the United States, had increased its holdings of US bonds by 1.6 percent in April, which was revised higher after an initially 0.4 percent drop. Japan, the second-largest buyer, trimmed its holdings 0.2 percent to $1.11 trillion in May.

"Given the recovery in the US and sluggish economic growth in Europe, I expect China to continue to buy US Treasuries in the coming months," said Guo Feng, a senior economist with Washington-based Institute of International Finance.

Baidu Inc, the largest Chinese language Internet search provider, agreed to buy a 57.4 percent stake in 91 Wireless from online gaming developer Net Dragon Websoft Inc for $1.09 billion, with the remainder to be acquired from other shareholders.

Richard Li, younger son of the Hong Kong billionaire Li Ka-Shing, is a major investor in 91Wireless. It is unclear if Li will sell his stake to Baidu.

Baidu, based in Beijing, is beefing up its mobile arm after investors claimed the money-rich Web search giant had missed opportunities to tap into the rapidly expanding mobile Internet market.

More than 10 billion apps have been downloaded through 91 Wireless since 2007. The company claims to be the biggest third-party app distributor in China in terms of active users and accumulated downloads.

The companies will further negotiate the relevant terms before signing definitive agreements on Aug 14. (Photo 4)

China's foreign direct investment in June increased the most in more than two years despite the economic slowdown.

FDI inflow in China's non-financial sectors reached $14.39 billion in June, up 20.12 percent year-on-year, the largest expansion since March 2011, according to the Ministry of Commerce. In the first half, FDI totaled $62 billion, up 4.9 percent year-on-year.

"The FDI increase this year remarkably proves the competitiveness of the Chinese economy and the global investors' recognition of the investment environment in China," Shen Danyang, spokesman for the ministry, said on Wednesday.

Beijing to increase number of bikes for rent

Beijing will nearly double its number of bicycles for rent to 25,000 this year to cut air pollution and traffic congestion.

With private automobile ownership estimated to exceed 6 million by the end of 2016, Beijing is encouraging a higher use of bikes to weaken, if not reverse, the dominance of automobiles in the capital.

The bicycle project that started in 2011 in Beijing has proved popular. More than 20,000 residents of the capital have subscribed to the service, amounting to more than 36,000 individual rides each week, a weekly increase of 7 percent.

The bikes are free to rent for the first hour, then are charged at 1 yuan (16 cents) for each additional hour. The maximum expense for a full day is no more than 10 yuan but people can only rent a bike for a maximum of three days at a time. 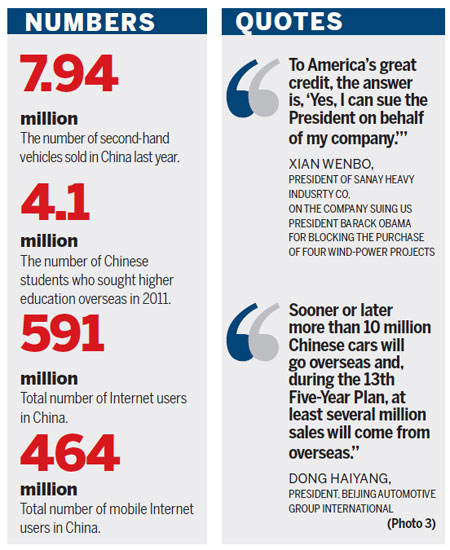