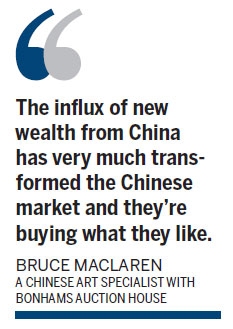 These buyers get the picture.

Chinese spending on art remains robust in 2013. That's despite a dip in the market last fall and an economic slowdown that recently knocked the Asian nation off its perch as the art world's biggest spender and back behind the former perennial leader, the United States.

"The buyers are definitely there. They're bidding strongly," said Bruce MacLaren, a Chinese art specialist with Bonhams auction house in New York.

He bases his "very optimistic" view of the Chinese market on the results of Bonham's June 24 auction of Fine Asian Works of Art in San Francisco. The event - 90 percent of which included Chinese works - saw "lot after lot soar past their estimates", according to the auction house's website. The 299 lots offered had a sell-through rate - the percentage of listings that end with a sale at a price where the seller makes a profit - of 85 percent by lot and 94 percent by value, according to the website.

"Several lots" of Qing Dynasty (1644-1911) porcelain did "very well", MacLaren said, selling for "several times" the estimated pre-sale price. Strong sales of jade items, furniture and paintings characterized the proceedings, he said. "Essentially, the things that were doing well (before the slowdown) continued to do well in June in San Francisco," the art expert said.

Those results lead MacLaren to expect "vibrant" results at the upcoming New York auction on Sept 16 of "Chinese Art from the Scholar's Studio", showcasing Chinese snuff bottles and paintings as well as other objects scholarly officials of the day typically collected, MacLaren said.

In 2011, China overtook the US as the world's largest art market as wealthy new buyers paid top prices for works from Ming vases to contemporary Chinese paintings. Michael Plummer, a New York-based art-market financial analyst, told China Daily earlier this year that new collectors in China were buying "recklessly," to snap up objects - both for their investment value and for the image of wealth they conferred. Then early last year, the steam began to go out of the buying spree. By year's end, sales at the Chinese mainland's major auction houses, the hub for the vast majority of art sales in the country, had plunged.

Although buyers are showing more restraint this time around, the market remains hot. As MacLaren said: "Things are not going for 50 or 100 times the estimate, but they are still selling very well."

On that note, increasing demand from Asian buyers boosted sales at Bonhams rivals Christie's and Sotheby's in the first half of 2013. Christie's three weeks ago reported a 9 percent rise in global sales in the first six months to 2.4 billion pounds ($3.73 billion), helped by the $58 million sale of painter Jackson Pollock's "Number 19" and as Asian bidders rose 15 percent. Sotheby's saw a 13 percent increase in Asian bidders at the start of the year, lifting six-month sales 6.5 percent to $2.55 billion, excluding private sales and dealer revenues.

One difference from the market's height two years ago is a slight drop-off in speculation that drove up prices to unprecedented levels, MacLaren said. A run on art by contemporary painters generally drove the frenzied buying, he explained. "Contemporary art can be speculative, as a lot of buyers go to (the work of) an artist they think will become the next big thing."

"You have a bit of hoping going on, as opposed to (buyers choosing) those objects that are 400 and 500 years old, a little more tested by time."

Accordingly, this time, contemporary art has lost some of its luster, while time-tested classics from the 16th through the 19th century - the Ming and Qing dynasties - have moved into the forefront, MacLaren said.

Despite's China's economic slowdown, MacLaren said he thinks its economic health is still envied by other nations. "It's slowed down from 11 or 12 percent, but it's still very, very strong and there's a lot of new wealth that's in China," he said.

"The influx of new wealth from China has very much transformed the Chinese market and they're buying what they like. And what they like, the prices have really gone up on."