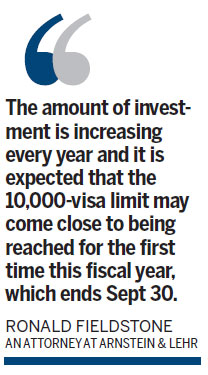 With the US economy eager for a strong comeback, the Obama Administration is seeking more foreign investment and one way to do it that is expanding across the country is the so-called Employment Based Visa-Category 5, or EB-5, program.

Dubbed the "green card for money" program, EB-5 sets a minimum investment of $500,000 and investors must be able to prove that their money has created at least 10 jobs for US citizens. In return, the investor gets a green card.

US law firms are busily trying to lure wealthy Chinese investors through EB-5 regional center pilot projects and some of them tend to be involved in larger projects that are only sponsored in China, since it is the dominant market for EB-5 investors.

"EB-5 is a vital source of capital for the US economy and is highly sought after by many American enterprises," Ronald Fieldstone, an attorney at Arnstein & Lehr, told China Daily on Thursday. "Chinese investors have accounted for almost all of our cases."

His firm has indirectly been counsel for offerings that have sponsored more than 1,200 Chinese investors over the past year.

"The amount of investment is increasing every year and it is expected that the 10,000-visa limit may come close to being reached for the first time this fiscal year, which ends Sept 30," Fieldstone said.

There are currently 15 to 25 US regional centers dominating fund raising in the Chinese market, and the tremendous supply from China continues booming in the US this year, despite the competition for Chinese capital from the European Union.

However, the program's higher visibility has been accompanied by scandal and the American EB-5 project owners will see a decrease if they don't figure out a better way to approach Chinese clients.

The Securities and Exchange Commission sued an EB-5 regional center in Chicago, accusing its operator, Anshoo Sethi, of defrauding more than 250 investors out of about $156 million through a convention center and hotel project. Most of the investors were Chinese.

In his latest move to approach Chinese investors, Fieldstone hosted a group of six journalists from China in New York City on July 15. The journalists were invited by a client who had a number of regional centers and projects in New York, New Jersey and Florida.

"The biggest concerns and questions expressed by the Chinese journalists involved the transparency of information being provided to potential investors and appropriate due diligence on the projects being touted as investment opportunities," Fieldstone said.

Given the difficulties encountered as a result of the Chicago convention case, there is a great concern both from the journalists' standpoint and from marketing agents and investors in China as to the credibility of projects in the US, he said.

"We have found that construction jobs and direct operational jobs are the safest jobs from an immigration standpoint," he said.

He also advised his Chinese clients to stay away from tenant occupancy or consumer spending since USCIS does not look favorably upon that type of job creation.

Concerning the expenses for EB-5 being increased to $800,000 from the current $500,000 minimum investment for a targeted employment area (TEA), he said "although there has been proposed legislation addressing the potential of increase in the minimum amount of investment, it is the opinion of professionals in the industry that it is unlikely that the $500,000 number will increase".

The current law allowing for the $500,000 investment continues until September 30, 2015, unless a law is passed to change it, he said.

Any increase in the minimum investment amount could have a chilling effect on Chinese investors, since the cost to enter the EB-5 program would accordingly increase, he said.

Martin Lawler, an attorney at Lawler & Lawler, told China Daily the "rumor" has been running around for quite some time, and some believe it will have a substantial impact on the EB-5 program.

"Our EB-5 investment program requires the capital to be put into a business and be at risk. Other countries have investor visa programs, such as Canada, that basically involve loans to the government," he said. "If our program goes to $800,000, other countries programs become even more attractive."

"Some members of the US House of Representatives have introduced a bill that would have the effect of increasing the amount to about $800,000. But a bill that already passed the US Senate does not do that," Robert Divine, an immigration attorney in Chattanooga, told China Daily.

"It leaves the amount alone for several years and only then starts to increase with inflation from that point," he said.